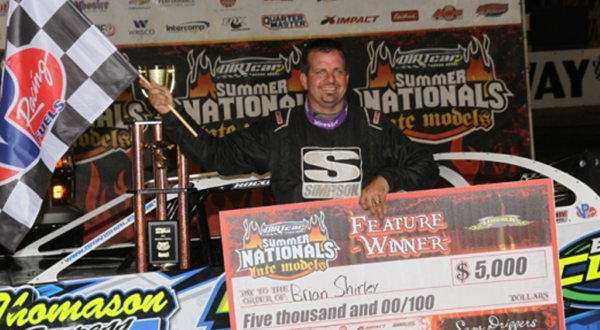 CONCORD, NC — June 12, 2019 — The DIRTcar Racing Summer Nationals “Hell Tour” is set to kick off the 34th consecutive year of competition in 2019. Starting on Wednesday, June 12, at Peoria Speedway (IL) and ending with two straight nights at Oakshade Raceway (OH) on July 12-13, the premier drivers and teams within the DIRTcar Late Model ranks will race in 26 events in 32 days spread out over eight states vying for a whopping $235,000 in first-place prize money over the marathon five weeks of competition.

Several late changes to the schedule include:

New in 2019, DIRTVision will be live streaming every Summer Nationals and DIRTcar Summit Racing Equipment Modified Nationals event. DIRTVision has partnered with DirtonDirt.com for this unprecedented exposure throughout the entire schedules for both tours. Family, friends and sponsors will be able to catch every minute of action by visiting DIRTVision.com.

There have been 659 Features all-time in the 33-year history of the DIRTcar Summer Nationals. Six-time DIRTcar Summer Nationals Champion Billy Moyer leads all drivers with an even 100 career wins. The Batesville, AR legend and National Dirt Late Model Hall of Famer picked up four checkered flags in 2018 on his way to a sixth-place finish in the final points. Milestone feature win #100 came at Thunderbird Raceway (MI) on July 11, 2018, which was his fourth and final victory in the series last year.

Four-time DIRTcar Summer Nationals Champion Shannon Babb collected a series-high five Feature wins during the 2018 edition of the Hell Tour and sits second all-time in career triumphs with 97. The Moweaqua, IL standout completed the top five in final points standings one year ago as his last victory of 2018 came at Spoon River Speedway (IL) back on June 25, 2018.

For the 2019 campaign, Pierce is back running the full Hell Tour schedule and will look not only to snap his winless streak dating back to the 2017 season, breaking the tie with Aukland, but also to break a tie for third in all-time series championships he shares with Scott Bloomquist and Dennis Erb Jr. All three drivers have three titles.

Two-time and defending DIRTcar Summer Nationals Champion Brian Shirley picked up four wins on his way to the second Hell Tour title of his career last year. The Chatham, IL standout sits tied for eighth all-time in career victories with 2010 DIRTcar Summer Nationals Champion, Jason Feger at 19 triumphs. Feger scored a single win one season ago as the Bloomington, IL veteran went to victory lane at I-96 Speedway (MI) on July 12, 2018 on his way to the final podium position in the final points standings.

Of the top 10 in all-time career victories, Moyer, Babb, Pierce, Shirley and Feger are expected to vie for the 2019 DIRTcar Summer Nationals Championship. Other drivers standing in their way includes 2018 Summer Nationals runner-up, Frank Heckenast Jr., who scored a win one season ago at Shadyhill Speedway (IN) on July 10, 2018 — his first win on the tour since 2015.

Three-time and defending DIRTcar Late Model National Champion, Rusty Schlenk also returns to the DIRTcar Summer Nationals for the second year in a row. The McClure, OH star went winless in 2018 on the Hell Tour but did finish fourth in the final standings. He does have two career victories but hasn’t seen victory lane since 2010 at his home track of Oakshade Speedway (OH) back on July 17 of that year. His only other triumph also came that year, at Kokomo Speedway (IN), so Schlenk will look to end a nine-year winless streak on the Hell Tour.

The remainder of the final top 10 in points from the 2018 tour are all expected to compete for the 2019 title. Led by El Paso, IL star, Ryan Unzicker who scored a ninth-place finish in the final points standings in 2018. He scored a single win, back on June 22, 2018 at Tri-City Speedway (IL) and has finished in the top 10 in Summer Nationals points every year since the 2010 season with a career best finish of a second in 2014.

Gordy Gundaker has been a regular on the tour since the 2016 season and finished seventh in points after finishes of fifth in 2016 and third in 2017. The St. Charles, MO driver finally scored that elusive, first career Summer Nationals victory on July 5, 2018 at Macon Speedway (IL). Also picking up their first career Summer Nationals wins were Devin Moran, Tanner English, Chad Zobrist and Zach Dohm, who won both races at Oakshade Raceway (OH) for the first two of his Hell Tour career. Repeating as victors in 2018 that were not in the top 10 in points were Brandon Sheppard (2) and Billy Drake, whose last win prior to 2018 came in 2003.

The 2019 DIRTcar Summer Nationals opener at Peoria will be the first of 15 races in the state of Illinois. The first of nine $10,000-to-win specials is just two days later, on Friday, June 14 with the third-ever appearance at Sycamore Speedway (IL). One race will see the DIRTcar Late Models of the Hell Tour go head-to-head with the World of Outlaws Morton Building Late Model Series on Friday, June 28 at Terre Haute Action Track (IN), paying $10,000 to win.