BARBERVILLE, FL – Feb. 8, 2010 – Darrell Lanigan won’t be a bridesmaid during the 39th annual DIRTcar Nationals by University of Northwestern Ohio.

The standout racer from Union, Ky., made sure of that on Monday night, scoring a hard-fought victory in the 30-lap UMP Late Model A-Main that opened the meet’s full-fender action at Volusia Speedway Park.

Lanigan, 39, outdueled Jimmy Owens of Newport, Tenn., and Brian Birkhofer of Muscatine, Iowa, to pocket a $7,000 top prize — almost exactly one year after finishing second in the first event of the DIRTcar Nationals by UNOH. He went on to record two more runner-up finishes in the remaining five nights of the 2009 series.

“It feels good to get a win right out of the box this year,” said Lanigan, the 2008 World of Outlaws Late Model Series champion. “But we didn’t do anything real different from last year. We just made some little tweaks and got some breaks.”

Driving a Rocket Chassis car he debuted late in the 2009 season, Lanigan used the inside lane to move forward from the fifth starting spot and grab the lead from Birkhofer on lap 14. Birkhofer regained command on lap 16, but Lanigan surged ahead on lap 19 and repelled late-race challenges in lapped traffic from Owens and Birkhofer to emerge victorious.

Owens settled for second place, 0.582 of a second behind Lanigan after his high-side bid rounding turns three and four on the final lap fell short. He started seventh in his Team Zero by Bloomquist machine.

Birkhofer finished third in his MB Customs car after leading laps 1, 3-13 and 16-18 in the wildly competitive affair, which included five lead changes among three drivers.

“The car was awesome and the track was perfect tonight,” said Lanigan, who made his first start of 2010 in preparation for his seventh consecutive season as a WoO LMS regular. “You could race all over it — so hat’s off to the Volusia Speedway track crew, and hat’s off to my crew too.”

“To race like that with Lanigan and Birkhofer — man, that was fun,” said Owens. “It was a great race.”

Birkhofer, meanwhile, came through his first appearance of the season with a good idea of what he should have done to his machine.

“We thought one thing and should’ve done the other,” said Birkhofer, who didn’t plan to enter the DIRTcar Nationals by UNOH until less than two weeks ago. “I’m looking forward to the rest of the week. It’s an awesome racetrack, and you’re gonna have to get your car right if you want to win.”

Two cautions flags slowed the feature — on lap five for a spin by Dale McDowell of Chickamauga, Ga., and lap 10 for the slow car driven by Tommy Kerr of Maryville, Tenn.

Heat winners were Sullivan, Birkhofer, Vic Coffey of Caledonia, N.Y., Jordan Bland of Campbellsville, Ky., Lanigan and Ross Camponovo of Clarksdale, Miss., who pulled off an impressive prelim triumph in his first-ever start at Volusia. The B-Mains were captured by Jason Feger of Bloomington, Ill., Pearson and Rick ‘Boom’ Briggs of Bear Lake, Pa. BARBERVILLE, FL – February 8, 2010 – Jared Landers started dead last and charged all the way through the 28-car field to win the Gator Championship for DIRTcar UMP Modifieds on Monday night during the 39th Annual DIRTcar Nationals By University of Northwestern Ohio at Volusia Speedway Park.

“I’ve been off here the first three nights,” lamented Landers, who collected the $5,000 top prize. “I dont know what to say, I just have to thank all the guys in the pits who have stuck with me.”

Landers, of Batesville, Ark., had been quiet in this DIRTcar Nationals campaign after capturing 5 of 7 features in 2009, but he slowly crept forward after UMP Regional Director Sam Driggers relegated Landers to the tail of the field for being late to staging. By lap 25, Landers had caught leader Stormy Scott, of Las Cruces, N.M., and stormed past on the outside for the lead.

“I’m out of breath, but I want to thank Sam for making me go to the back and work my way back up here, because I knew I could do it,” Landers said. “He made me do what I had to do.”

Landers would go on to lead the final five laps unchallenged on his way to his second ‘The Gator Championship’ in as many years.

Scott, 20, settled for second, the second time he had been overtaken in the closing laps during the DIRTcar Nationals By UNOH to finish as a runner-up.

“The DIRTcar UMP tires, we don’t get to race on those but once a year and this car was pretty well new when we got down here,” Scott said. “Were still really happy with our performance.”

“It was a good run for us even though we weren’t as good as we wanted to be,” said Dillon, who is NASCAR car owner Richard Childress’ grandson. “It was a cool race.”

Four last chance B-Mains preceded The Gator Championship in which only winners transferred into the main event. Jason Hughes, of Westville, Okla., would claim the first of four while Dale Mathison, of Clearwater, Minn., turned back Clint Bowyers last ditch effort to earn a spot in ‘The Gator’ during B-Main 2. Ty Dillon, of Welcome, N.C., along with Peyton Taylor, of Batesville, Ark., would go on to claim the final two spots of ‘The Gator’ field.

The 39th Annual DIRTcar Nationals is brought to fans by the University of Northwestern Ohio. The University of Northwestern Ohio is the Official Education Provider of DIRTcar Racing. UNOH can deliver strong progressive academics, with flexible scheduling at an affordable price. The choice of a university at which to study is a major decision. Your future as a productive professional and a responsible citizen can be greatly enhanced by that decision. Students at UHOH will become critical thinkers, will become communicators, will have the most current technology and will experience small class sizes taught by knowledgeable faculty with real working experience. For more information visit UNOH at http://www.unoh.edu 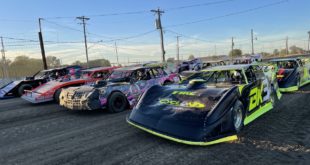