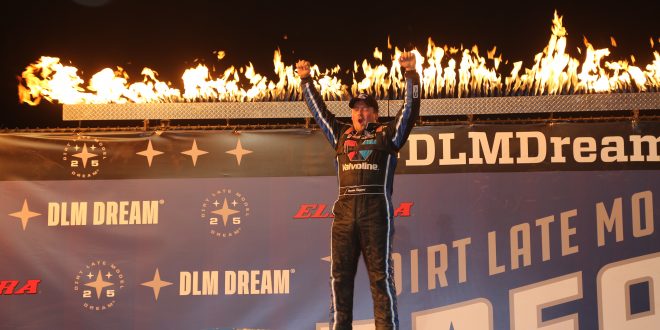 ROSSBURG, OH – June 8, 2019 – After decades of coming to Eldora Speedway, after numerous Dirt Late Model Dream entries and no big trophy to show for it, Mark Richards and the Rocket Chassis house team have finally put their car in Victory Lane, a winner of a crown jewel event at “The World’s Greatest Dirt Track.” Brandon Sheppard continued his season of dominance behind the wheel of the Rocket1 Racing machine on Saturday night, scoring the $125,000 check after 100 laps in the 25th running of the Dirt Late Model Dream over Dale McDowell and Shane Clanton.

This win stands as Sheppard’s first victory at “The Big E” of any kind since his two preliminary feature wins in the 2015 World 100. It also serves as one of the biggest paydays in Rocket1 Racing history, and Sheppard could not be prouder to be the man to bring it home for his longtime friends and car owners, Mark Richards and Steve Baker.

“This is just… a day of dreams, that’s for sure,” said a smiling Sheppard after the race, reflecting back on the magnitude of his accomplishment for his legendary racing team. “All-in-all, this is one of the big ones that you always want to win, and it just so happens that this year, it paid $125,000. This is just phenomenal, I’m almost at a loss for words.”

Sheppard began his charge to the front right from the drop of the green, advancing 10 positions in just 19 laps. He did so by making the majority of his passes in the low-middle grooves, knowing that saving his tires would be necessary later in the race.

The original leaders, Kyle Bronson and polesitter Kyle Strickler, took command out front and led the first 48 circuits before Earl Pearson Jr. came to the front and brought a full head of steam, powering underneath Bronson for second in turn two and then Strickler to take the lead out of turn four.

Once Pearson grabbed the lead, it didn’t take long for him to show his hand, as he opened up a 2.5-second advantage over Sheppard inside of just 12 laps. With the way Pearson was smooth sailing on the top side, it looked as though he was going to be a contender at the end. Until trouble struck the leader with just 29 laps to go…

According to his crew members, Pearson ran over a chunk of another car’s spoiler that was blown up into the middle of his groove, resulting in a punctured right-front tire and forcing him to surrender the lead to Sheppard. Pearson got the tire changed before the ensuing restart, but ultimately ended up calling it quits after getting involved in a wreck with 87 laps in the books.

Meanwhile, 2012 Dream winner Shane Clanton had already been rolling on his charge to the front. Starting back in the 11th position, “The Georgia Bulldog” sat as low as 15th at one point, but got back up on the horse and cracked the whip at lap 60, picking up five spots in just 13 laps to get back into the top five.

“When I fell back there, I just got hung out in the middle on a restart and they went by me on both sides,” he said. “Seven cars passed me in a lap and a half, and then the caution came out again and allowed me to regroup and get my bearings back. I knew we still had a long way to go, so I was just biding my time to get to the front again.”

And get to the front he did, as he fell back to eighth before a caution came out on lap 83 but passed four cars on the ensuing restart to take fourth. A battle ignited with 10 laps remaining for the second spot with Clanton, Dale McDowell and Tyler Erb – one which McDowell won but set Clanton up for the opportunity to come back and pass Erb for third with just two circuits remaining.

“When I got up beside Dale, his crew guys told him to get to the bottom,” Clanton said. “It was cleaning up, and when he got down there it took the air off my nose and I pushed across the middle. I was afraid I was going to lose third, but luckily I was able to hold onto it.”

On the other side of that battle, McDowell put together another terrific effort that his fans are used to seeing from him at Eldora, culminating with an incredible photo-finish at the line as he made a last-ditch effort to try and nip Sheppard for the win.

Once McDowell cleared Erb and Clanton with only five laps remaining, he attacked the low side of the half-mile racetrack and found the grip he needed to catch Sheppard, who was about a half-straightaway ahead at the time. Lap by lap, “The Mac Daddy” chopped away at “The Rocket Shepp” and his lead, reaching the #1’s quarter-panel with only three turns left.

Into turn three they raced, Sheppard nearly scrubbing the outside wall, McDowell hugging the inside jersey barrier. As they came out of turn four, McDowell drifted up the track and appeared to have nosed ahead by inches, but Sheppard hit a little something he’d been using lap-after-lap on the high side to propel him past McDowell for the win by just 0.056 seconds.

“It was one of those deals where I was running the cushion and when I got to the front-straightaway, I was still on the cushion’s bend a little bit, and there was a little hump there and it shot me down the track,” Sheppard said. “We didn’t beat him by much, but it was just enough.”

McDowell simultaneously used the great bite he got on the bottom of turn four and dove for the stripe, making contact with Sheppard and sending himself spinning to a stop in the middle of turn one after the checkered.

“I had a good drive off of the corner and I actually thought I could beat Brandon to the flag,” McDowell said. “He just got a good run up top and came to the finish line before me.”

McDowell had lost a close one, but in the end, knew it was just another racing deal and spoke of it like a true champion, congratulating Sheppard, Richards, Baker and the whole Rocket1 Racing team on their first crown jewel win at Eldora.

“It just wasn’t meant to be,” McDowell said with a smiling shrug. “We ran second, everybody had a good, safe race. There is a lot of money difference, but you can’t think about that. You just go on to the next one and try to win it.

“We’re proud that we could make it that close and make it exciting for the race fans. Hopefully, we can come back here in September and get us one,” McDowell added.

McDowell, Sheppard, Clanton and most all of the competitors seen at Eldora this weekend will definitely be back this September for the 49th annual World 100, don’t miss it!