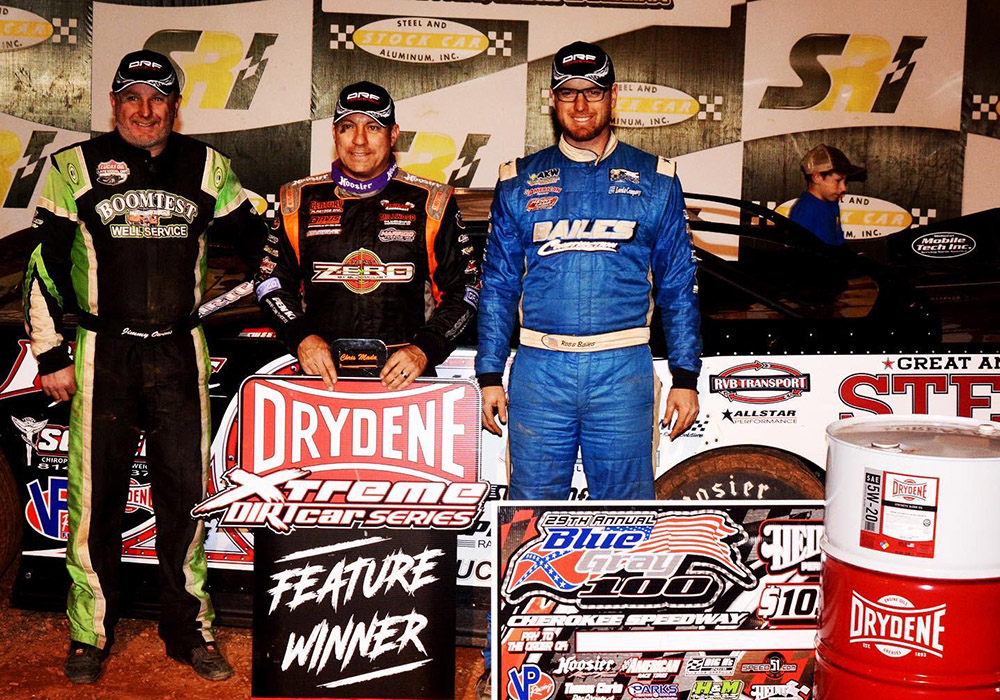 GAFFNEY, SC – From the spectator line forming outside Cherokee Speedway at 9:30 a.m. waiting to get in, to announcer Rick Eshelman’s The Most Extreme Super Late Models in the Southeast four-wide call, the inaugural race of the Drydene Xtreme DIRTcar Series lived up to its hype with the huge crowd, terrific car count and great racing on Sunday afternoon at the 29th annual Blue Gray 100.

Thirty-eight of the Southeast’s best Super Late Model drivers came out to take part in the first race of this brand-new Series, posting the best car count the event has seen since 2007.

In the end, home-track favorite Smokey Chris Madden put the cherry on top of his stellar 2019 season by picking up the win over Ross Bailes and Jimmy Owens for his first checkered flag of the year at Cherokee and sixth Blue Gray title of his career.

“It’s pretty awesome to come here in front of our home crowd. I have a huge fanbase here, and a lot of people don’t get to travel the road and watch us race, so it means a lot to be able to pick up a win whenever we do get to come here and race,” Madden said.

From his seventh-place starting spot, Madden began his charge to the front in the early stages. Polesitter Zack Mitchell led through the first eight laps before Owens, piloting the Tommy Pope-owned #22 Longhorn Chassis, began working the high side of the speedway and drove around Mitchell on lap nine.

Madden kicked it into high gear, passing Mitchell for second on lap 20, and began his chase for Owens’ rear bumper. It didn’t take long for the Team Zero pilot to track Owens down, passing him on the high side less than 10 circuits later. Madden said there was no time to waste once he found his groove and caught sight of the leaders.

From that point on, it was lights out for the rest of the field. Madden set it on cruise control and went virtually unchallenged for the lead through lapped traffic and several caution flags to score his ninth Super Late Model win of the year in the Sweet-Bloomquist #0M, capping off a terrific season since changing teams over five months ago.

Throughout his storied career, Madden has graced Cherokee Speedway Victory Lane numerous times in various special events. He’s raced on several different track conditions at The Place Your Mama Warned You About, and said Sunday’s racing surface was just right for a race of this caliber. That, and his great experience level gave him all the advantage he needed to get the job done.

“It had a top and it had a bottom that stayed there for quite a while,” Madden said. “I was able to roll through the middle of the racetrack pretty good.”

Contained within that Cherokee Speedway mental notebook Madden has developed over the years is a section on how to overcome its biggest obstacles. Especially in these 100-lap races, with no caution laps being counted, Madden said a great skill to have in the cockpit is how to save some of the racecar for the end.

“Tire management is always a big thing here,” Madden said. “That was another factor that’s not been a factor here with some of the other series, with them counting caution [laps] and all that. So that put some of those other guys back in play, but when we run 100 true green flag laps around this place, you’ve got to have some tire management, some throttle control and a well-balanced racecar, and we had it all tonight.”

Just a few days removed from his spot behind the wheel of the Barry Wright Race Cars house car, Ross Bailes came to Gaffney with a fire of determination burning inside as he drove fellow South Carolinian Johnny Pursley’s #9 to a solid runner-up finish.

Bailes said he had to play the waiting game for a bit once he reached the head of the field. Passing Mitchell for third just before halfway, Bailes was consistent in the low groove and held his position over the next 40 laps, setting himself up on Owens’ bumper for the final restart.

“I feel like if you start up front, the objective is to get to get out front quick. But if you start sixth like I did tonight, you’ve got to ride and wait for them to use their stuff up and then try to go after it,” Bailes said.

Into Turn 1 he dove, swiping the runner-up spot away from The Newport Nightmare down low. With tire wear on his mind in the late stages, Bailes said he took caution, but not before pulling the biggest move of his race on the 2007 Blue Gray winner.

“That last restart with 10-to-go, I was just riding,” Bailes said. “I wanted to make sure that I got into one in front of Jimmy, and after that I just stayed on the bottom and just tried to make it to the end.”

For The O-Show himself, another great podium finish to wind down his 2019 campaign. He led laps early but faded just a few spots as the race wore on, citing setup inaccuracies for his difficulty in the late stages.

“It was just way too tight,” Owens said. “The longer the race went, the tighter we got. Couldn’t turn.”

Race 2/6 in the inaugural Drydene Xtreme DIRTcar Series season kicks off with Grinch at the Gap on December 7! The “Grinch 40” at Volunteer Speedway in Bulls Gap, TN, will feature a 40-lap, $5,000-to-win main event as the only Xtreme DIRTcar event in the Volunteer State before the year is out.

Get your DIRTVision FAST PASS today to watch every lap of The Most Xtreme Super Late Models in the Southeast LIVE from your home all winter long!