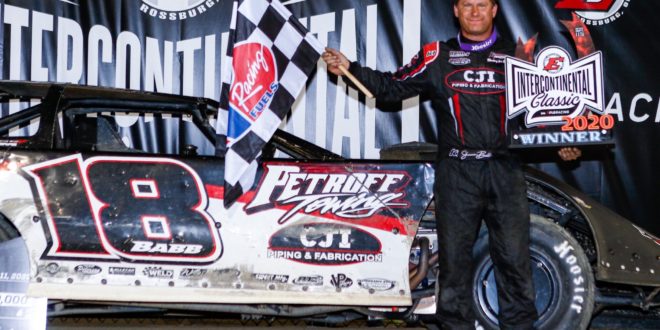 It was Babb, then Richards, then Babb again on Friday night in a thrilling Intercontinental Classic preliminary feature at Eldora Speedway.

Swapping the lead on laps 22 and 24, Shannon Babb of Moweaqua, Ill. and Josh Richards of Shinnston, W.V. traded big league blows in the closing stages with $10,000 and a trip to “The Big E” victory stage on the line. Acing the final restart with seven to go, Babb got the best of Thursday’s winner and survived one last ditch effort to score his first victory at the Rossburg, Ohio half-mile in what he believes has been 20+ years.

A triumphant Babb offered a rare display of pure jubilation and downright excitement in victory lane following his denial of a preliminary sweep for Richards. It wasn’t just his first Eldora win in what seems like forever, but also a huge milestone in putting his Team Zero Race Car No. 18 at center stage for the first time in a race of such magnitude.

“It’s been a long time since I’ve been on this stage,” Babb shouted victoriously after climbing out. “Gosh, it’s probably been 20 years or so since I’ve been up here. This is amazing. I have to thank Cody Somner, he personally built this chassis for me and welded it up himself. The whole night really just came together. This thing was a lot of fun to drive, it’s so fast right now.”

Taking the lead from the outside pole, Babb paced the opening 21 circuits before lap traffic spiced things up and added an extra element to Friday’s 30-lapper. Caught in the dirty air behind lapper Ross Bailes, Babb’s lead quickly diminished as Richards closed the gap and created a battle for the lead.

Sliding his Clint Bowyer Racing No. 14 iRacing.com, Rocket/Cornett across turn one, Richards built his run and executed a slide job to steal the lead from Babb on lap 22. Darting to the bottom of turn three and cutting off Babb’s momentum, Richards meticulously held off the four-time DIRTcar Summer Nationals champion before the caution flew and set up the final restart of the race with seven to go.

While Richards struggled to light the tires and launch off turn four, Babb mastered the final restart and wheeled his way right back to the top spot on lap 24. Finding his rhythm over the closing laps, Richards chopped the gap away and reached Babb’s rear bumper coming to the white flag with the win on the line. The slightest mishap in turn one proved costly, however, allowing Babb the breathing room he needed to survive and reach the checkered flag over Richards by just .694 seconds.

“I knew I had a chance when Josh chose the top,” commented Babb on the final restart. “I was just choosing the outside because of the cushion, so when I got the bottom I knew we would have a big run into turn one. I got a great launch and found traction that you wouldn’t believe. It was fun racing with Josh, he’s been fast all weekend. This thing we’ve got is bad to the bone though.”

“Absolutely; there’s no doubt about it,” Babb replied when asked if he could win Saturday’s $50,000, 67–lap main event. “You know, 67 laps isn’t really that long around here. These cars have been getting better and better as the laps go by. I’ve got all the confidence in the world right now.”

Richards, who topped Thursday’s 30-lapper in a wire-to-wire run, settled for a second-place effort following his bobble on the final restart. Joining Babb and Richards on the preliminary podium was Jonathan Davenport of Blairsville, Ga., who put the Longhorn Chassis No. 49 to third after a close duel with Chris Ferguson over the final few laps. “Fergy,” of Mount Holly, N.C., was Friday’s fourth-place finisher aboard his Team Zero Race Car No. 22, and “High Side Tickler” Kyle Strickler rounded out the top five with a 15th-to-fifth charge.

Closing out the top ten on night two of Intercontinental Classic was Tim McCreadie of Watertown, N.Y. in sixth aboard the Longhorn No. 39; Kyle Bronson of Brandon, Fla. in seventh with the Rocket No. 40B; Brandon Sheppard of New Berlin, Ill. in eighth in his Rocket1 Racing ride; Dennis Erb Jr. of Carpentersville, Ill. in ninth driving the Rocket No. 28; and Darrell Lanigan of Union, Ky. in tenth representing the Barry Wright ICON No. 29V.

The Intercontinental Classic concludes on Saturday night at Eldora Speedway with four heat races, two semis, and the 67-lap, $50,000-to-win championship feature on the docket. With expected weather in play on Saturday night, officials have already made the call to bump up the finale by one hour, putting hot laps on track at 5:30pm ET.