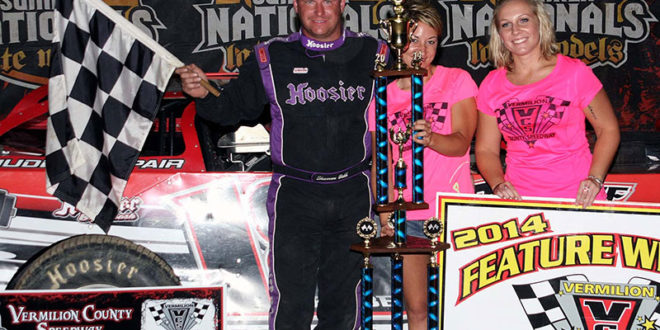 Jason Feger started the 40-lap feature event from the pole-position with points-leader Shannon Babb starting to his outside. Feger would fail to lead the opening lap as Babb powered his way to the front of the field, leaving Ferger to settle into second-place.

Babbs closest competition in the championship standings, Ryan Unzicker, suffered from a flat right-rear tire on lap four, causing the races only caution and bringing Feger back to the leaders back-bumper. The restart was Fegers only shot at Babb for the lead, but the leader proved to be too strong and pulled away from second-place, eventually building up a three-second lead with 10-laps remaining.

Babb never faced a serious challenge for the victory, as he dominated all 40-laps en route to claiming the $5,000 checkered flag at Vermilion County Speedway  his 87th career DIRTcar Summer Nationals victory, just one behind Billy Moyer on the series all-time wins list.

The car was really comfortable tonight, said Babb, who within the last week has combined with Billy Moyer to win six-out-of-seven races. We never changed nothing on the thing all night long. It was good all night. Theres probably one out of the whole year that that happens.

With just four races remaining in the 2014 DIRTcar Summer Nationals championship chase, Shannon Babb extended the slim 14-point advantage he had over Ryan Unzicker, who recovered from his lap four flat tire to finish seventh, in whats shaping up to be the tightest points battle in series history.