JACKSONVILLE, Ill. — July 3, 2013 — Shannon Babb scored his second victory in as many nights when he rolled to victory Wednesday night in the 17 th round of the 2013 DIRTcar Summer Nationals “Hell Tour” at Jacksonville Speedway.

With the six-week-long “Hell Tour” officially hitting its halfway point, Babb might be just hitting his stride. Babb started from the outside of row two, behind McKay Wenger and former DIRTcar national champion Rusty Schlenk, who was leading the majority of the 40-lap feature when his car failed him with nine laps to go. That gave Babb his golden opportunity to lead the remaining few laps and capture the $5,000 checkered flag. Points-leader Brandon Sheppard finished second.

“I finally feel like I got my act together,” said Babb, a three-time Summer Nationals champion from Moweaqua, Ill. “We’ve got a program that’s really working. The car’s really good. I’m really happy with it.” 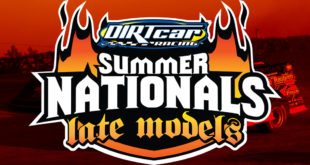