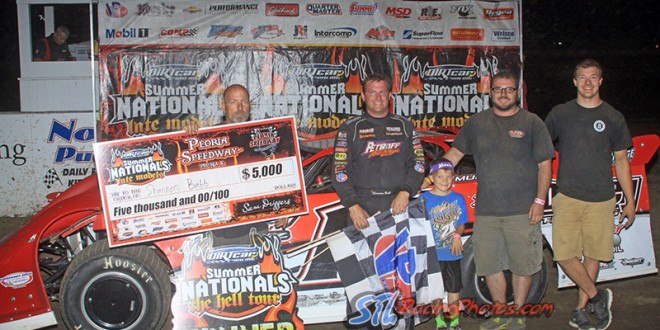 Unzicker led the first two laps on Tuesday night before Pierce moved into the top spot. Babb, who started fourth, worked first past Unzicker then Pierce and never looked back.

“The moisture, it was soaking in around in the wall at the top of three and four, and one and two, but one and two falls off the banking on exit, but three and four was awesome,” said Babb, a four-time DIRTcar Summer Nationals champion. “I started fourth and I was in the right position to find that line, and I was able to my way around them guys.”

The DIRTcar Summer Nationals tour races into Belle-Clair Speedway on Wednesday night in Belleville, Ill. Pierce extended his championship lead over Moyer Jr. to 32 points. The victory helped Babb move into third in his quest for a fifth crown.