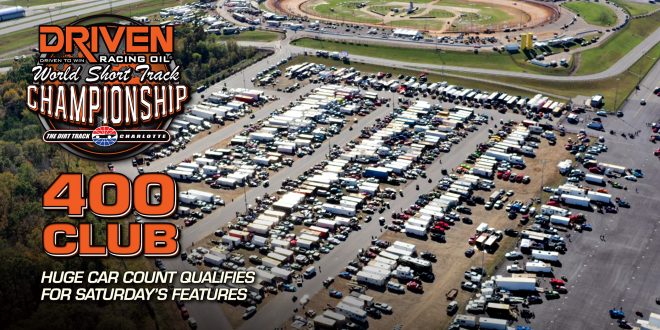 More than 400 race cars across nine divisions took to The Dirt Track at Charlotte on Friday for the opening round of DIRTcar Racing’s Fourth Annual DRIVEN Racing Oil World Short Track Championship.

The day’s events included Qualifying and Heat Race action, setting the stage for Saturday’s Feature events. Saturday’s schedule has been flexed to an earlier start time, with pit gates opening at 9 a.m., spectator gates opening at 1 p.m. and racing slated to begin at 2 p.m.

Competitors have converged on The Dirt Track at Charlotte from 18 different states plus Canada plus Australia.

There was plenty of excitement to go around in each division on Friday:

The field was divided into six Heat races, only the winners going to Saturday’s redraw. Brown led every lap of Heat 1 and will certainly be a favorite to defend his title on Saturday, regardless of where he starts. Timmie Harrelson, of Reidsville, NC, took the checkers in Heat 2 while Timbo Mangum beat Hudspeth by over 2.6 seconds for the win in Heat 3.

Summit Racing Equipment UMP Modifieds: Forty-seven of the best DIRTcar UMP Modified drivers in the country took to The Dirt Track at Charlotte for their qualifying events, most of which were claimed by the big names on the roster.

Hoffman dominated Heat 1 while Strickler did the same in Heat 3; expect both to be strong contenders for the win on Saturday. Taylor Cook got the win over David Stremme in Heat 2, both transferred to Saturday’s redraw. Heat 4 was claimed by Will Krup, who took Michael Tarlton with him to the redraw.

In Heat Race 1, Robert Bublak left his competition in the dust to pick up the checkered flag. Bublak is aiming to improve on last year’s ninth-place finish in the finale. Notable speedster Nicole Hoag took second. Both drivers are in the redraw. Hoag and her husband Alex are competing in the division this weekend together.

Last year’s DRIVEN Racing Oil World Short Track Champion Jackson Gil picked up where he left off with a Heat Race 3 win. Gil outdueled Jeff Taylor, who started on the pole. They move on to the Top 8 redraw as well.

DIRTcar Sportsman Modified Series Champion and multi-Track Champion Kevin Root seemed to struggle in the Heat Race and finished in sixth, well out of the redraw.

NAPA Super DIRT Week XLVIII Chevy Performance 75 Champion Kyle Inman launched to the front of Heat Race 4 and stayed there for the win. Corey Cormier crossed the line in second to jump into the Top 8 redraw. Jessica Power finished on the podium at The Dirt Track at Charlotte in 2018 but she was only able to muster a sixth in Heat Race action. She’ll have to come from the back of the pack to match or beat her 2018 effort.

The Hoosier Racing Tire Pro Modifieds have set themselves up for an action-packed Feature Saturday night. With Hot Laps, Qualifying and Heat racing out of the way, all that remains is a redraw and Last Chance Showdown to set the 26-car field for the $1,500-to-win Feature.

Legend Robert Yetman showed the field how it’s done with a strong victory in Heat Race 1. Jason Meltz drove his stunning blue No. 51 RacerTents.com DIRTcar Pro Stock to second and into the Top 8 redraw. David Pepaulo and Jay Casey also qualified for the redraw.

The excitement continued in Heat Race 2, which was taken by Luke Horning in the No. 2H Pro Stock. Big names filled out the rest of the redraw order including past Series Champion Jocelyn Roy, Series driver Brian Carter and Lebanon Valley regular Rick Duzlak.

Chevrolet Performance 602 Late Models: The Chevy Performance 602 Late Model division was, essentially, a story of South Carolinian domination in the first night of qualifying events. Thirty-five drivers signed in for competition and took to the track for their timed Hot Lap sessions in two groups. Group A was led by Hopkins, SC’s Austin Mintz with a lap of 16.864, while David Smith, from Inman, SC, topped the charts with a lap of 16.936.

As expected, heats went well for team South Carolina. Billy Rushton claimed victory in the first race and took runner-up Chase McCormick with him to Saturday’s redraw, but not before fast timer Mintz blew a left-rear tire while leading. Blake Dill and Michael Brown were the redraw cars from Heat two, David Smith and Colby Cannon in Heat three and Mike Davidson and Lee Gray (Rossville, GA) in Heat 4.

DRIVEN Racing Oil Crate Sportsman: Every Heat race saw drivers not giving each other an inch, which led to multiple cautions. However, their fierce battles resulted in strong finishes. Ronnie Mosley, in the No. 9, raced side by side with Russell Williford, in the No. 14, for several laps in the opening 6-lap Heat race. Mosley eventually pulled ahead and took the win.

COMP CAMS Mini Stocks: Forty-nine COMP CAMS Mini-Stocks completed three rounds of Qualifying before time ran out on Friday’s program to complete their Heat Races, which will kick off the racing at 2 p.m. on Saturday.

Pete Brew Jr., Nicholas Broome and Jamie Mattison were quickest in their respective groups, with Mattison quickest overall at 19.486 seconds around the four-tenths-mile dirt oval.

DIRTVision Hornets: The largest division of cars in the event belongs to the DIRTVision Hornets, with 70 taking time in Qualifying out of 76 on the property. Friday night’s action reached its time limit before the DIRTVision Hornets could complete their Feature events. An additional Feature is being added to the schedule, giving them three Features following the Mini Stock Heat Races at 2 p.m. Saturday.

The final two Hornet Features will take place later in the night after the Mini Stock Feature.

Drivers John Windham, in the No. 65 car, and Andrew Smith, in the No. 162 car, set themselves up as early favorites. Windham was fastest in Hot Laps and Smith was fastest overall in Qualifying — the only driver to break into the 19 second bracket.