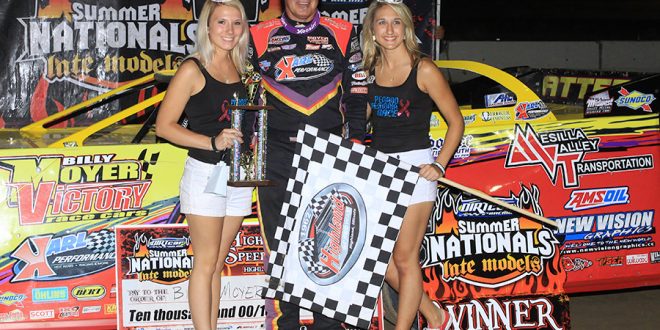 The series returns to action Sunday at Quincy Raceways

Devin Gilpin started on the pole but Moyer very quickly took over the top spot and steadily built and insurmountable lead. Through 30-laps Moyer extended his lead at one point to nearly half a track length over Gilpin and current points leader and reigning series champion Bobby Pierce.

Four cautions waved throughout the feature but Moyer held tough. He scored victory with Gilpin in second and Pierce in third.

We changed a couple of things on the car today, Moyer said. We had to redeem ourselves as bad as weve been the last couple of days. It ran like it was supposed to tonight. It felt good.

The DIRTcar Summer Nationals returns to action on Sunday night at Quincy Raceways.