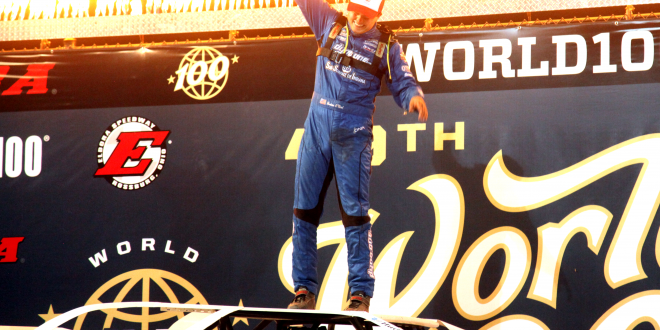 If any race fan out there ever needed a sign that the future of Dirt Late Model racing and its longevity in the motorsports world are alive and well, let Thursday night’s World 100 preliminary Feature results be it. Billy Moyer, 61, of Batesville, AR, and Hudson O’Neal, 19, of Martinsville, IN, collected victories in qualifying Feature action at Eldora Speedway on Thursday night, displaying the potential for domination at any age on the big stage.

Forty-two years separates Moyer and O’Neal in age, but it seemed as though age was merely a number no more significant to their driving ability than the one stickered onto the side of their cars. Both drivers wheeled their machines to victory by just plain outrunning their opponents, and those nice event points payouts will certainly come in handy for Saturday’s Heat race line-ups.

As he’s done so many times over his illustrious career at “The Big E,” Billy Moyer showed the field how it’s done over 25 laps to win his first crown jewel event Feature of any kind at Eldora since going to Victory Lane in a 2016 Dirt Late Model Dream preliminary event.

Starting from the pole, Moyer immediately grabbed the lead and took off, working his way through multiple segments of lapped traffic near flawlessly through the first 22 laps before the caution came out with just three laps remaining. This put two-time World 100 winner Jimmy Owens, of Newport, TN, right on his rear bumper for the restart.

“Jimmy gets around here awfully good too,” Moyer said. “I knew he’d pass some cars to get where he was at, so I knew he’d be good.”

Both Moyer and Owens got a good jump on the restart, but Owens was unable to hold the top side through turns one and two and slipped back a few spots. Moyer, however, stayed strong in his turn one charge and was able to fend off a hard-knocking Kent Robinson for the win in the final circuits.

“I just tried to hit my marks and not mess up in the last three laps,” Moyer said.

When he pulled the black-and-white #21M onto the Victory Lane stage after clearing the scales, “Mr. Smooth” got out and gave a simple wave to the crowd as the pyro lit up on either side of him. He said he wasn’t exactly “beating on this chest” after the checkers were thrown because “everything went [his] way.” After winning this event six times, Moyer knows that to do well at Eldora, a few breaks have to go your way and starting each race up front is crucial. And for good reason.

“These cars are so air-sensitive now that when you’re in the front, you have all the clean air on you, and it makes a huge difference,” he said.

There aren’t many racecar drivers, if any at all, that can say they’ve won a Dirt Late Model Feature at Eldora at just 19 years old, let alone one as part of World 100 weekend. Hudson O’Neal just added that to his resume on Thursday night by grabbing the lead away from Shannon Babb after a restart to claim his very first Eldora Speedway crown jewel event preliminary Feature win.

Babb kicked things off by jumping out to the early lead and clicking off the first eight circuits before the race’s first caution came out. On the ensuing restart, Babb got the jump to get ahead and lead lap nine but not without heavy pressure from O’Neal to his inside. The field raced across the start/finish line and O’Neal threw it hard into turn one, pulling a perfectly executed slidejob on the Petroff Towing #18 to swipe the spot, and the eventual win. The Dyno-One #71 brought it the rest of the way home for $10,000 and a good start to his World 100 weekend, as he attempts to qualify for his second main event start.

“I knew that I needed to get to the lead, and it was going to be so hard to pass [Babb] racing,” O’Neal said. “That yellow provided the perfect opportunity to take advantage of it.”

“I knew that if I could get a good restart and roll with him down the front-stretch, I could probably set myself up good, and that’s exactly what I did,” O’Neal added.

He may have been addressed by his clever nickname “The New Deal” in Victory Lane at the end of the night, but walking around in the pit area earlier Thursday afternoon, he was known as the birthday boy. And what a special gift he received from “The World’s Greatest Dirt Track,” a World 100 preliminary Feature victory and an authentic event plaque to commemorate.

“It’s just a dream come true to stand on that stage, to be able to win here at Eldora,” O’Neal said. “I’m excited for tomorrow.”

He may have only been at the controls of a Dirt Late Model for a small fraction of the time his father Don has over his racing career, but Hudson has fond memories of gracing Victory Lane stages with one of his childhood heroes as a young boy, and admits it was cool to see the roles reversed all these years later.

“Sharing this with my dad was probably the best part of this whole deal,” O’Neal said. “To be able to stand on that stage and take a picture with him, it’s kind of gone full-circle. I stood on that stage when I was five of six years old with him, so to be able to do it the other way around, it’s a true blessing.”

The World 100 action from Eldora Speedway picks back up on Friday, Sept. 6 with hot laps going live on DirtonDirt.com or Eldora.tv at 6 p.m.!