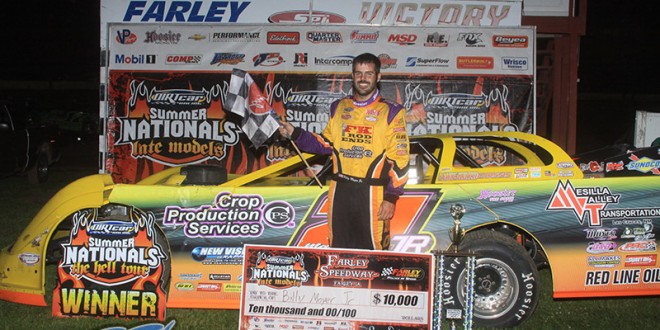 Moyer Jr., of Batesville, Ark., started the feature alongside polesitter Bobby Pierce. Pierce and Moyer Jr. are 1-2 in the DIRTcar Summer Nationals championship standings, but on Wednesday night it was Moyer Jr. who surged to the lead on the first lap and survived four restarts to claim his first victory of the 2015 tour.

Chris Simpson charged from sixth to finish second with Pierce, Shannon Babb and Chad Simpson rounding out the top five.

With Pierce winning Tuesday at Jacksonville Speedway and Moyer Jr. getting into the win column on Wednesday night, the championship battle has taken an interesting turn. Pierce’s father, Bob, is a two-time DIRTcar Summer Nationals champion (1992 & 1995) while Moyer Jr.’s legendary father, Billy, is a six-time DIRTcar Summer Nationals champ (1993, 1994, 1996, 1999, 2001 and 2003). Should either of them win the crown, they would become the first championship-winning father-son combo in series history.

“I’m not going to lie, I want my name on that championship with my dad,” Moyer Jr. said. “If we stay up front we’ll keep going.”

The DIRTcar Summer Nationals returns to Illinois for the rest of the week beginning Thursday at Spoon River Speedway in Canton, Ill.