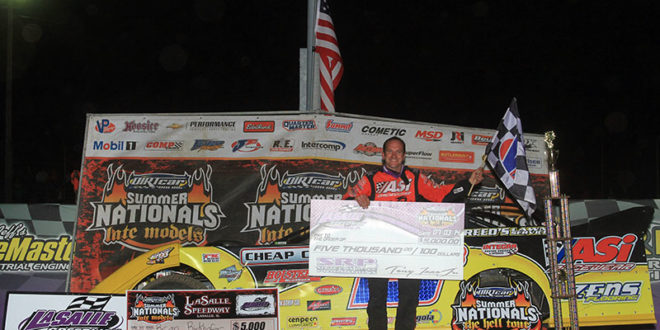 Feger, who started from the pole, slipped around Ryan Unzicker for the lead on the opening lap with Birkhofer, who started in the row right behind the leaders, falling back to fifth. Birkhofer managed to find grip on the inside line, which changed his race drastically as he rocketed back to the front of the field a few laps later.

Feger lead the opening 10 laps of the 40-lap feature, but he was no match for Birkhofer. Birkhofer quickly made his way to the front, and shot around the leader on lap 11. The leader quickly extended his advantage on the field as Feger faded back to fourth.

Birkhofer dominated the remaining 29 laps, only being challenged once on a late race restart by Unzicker, but he eventually pulled away from second place and secured his second DIRTcar Summer Nationals victory of the season at LaSalle Speedway.

Right now I got a good feel for the car and Im just confident in what it does, said Birkhofer referring to his Rocket Chassis race car. Any driver will tell you that they can do a lot with the car when they get that confidence level, and I kind of have that right now. It is racing, though, and it can turn in a heartbeat, so well just keep taking it while its coming this way.