LINCOLN, Ill. — June 30, 2013 — Bobby Pierce is only 16 years old but he accomplished a feat on Sunday night at Lincoln Speedway that many in Dirt Late Model racing only dream about — winning a DIRTcar Summer Nationals event.

Pierce, of Oakwood, Ill., captured the $10,000 victory in dominating fashion at quarter-mile Lincoln Speedway on the 12th night of the six-week DIRTcar Summer Nationals Hell Tour, becoming the youngest winner in the 26-year history of the grueling summer series.

Pierce lined up on the outside of points leader Brandon Sheppard on the front row for the 60-lap feature, but it was three-time series champion Shannon Babb who charged from sixth to lead the 22-car field in the early going. Pierce caught and passed Babb on lap 9 then held off 2004 series champion Don O’Neal to the checkered flag.

“We’ve been trying so hard to do this, getting top-fives and coming close,” said Pierce, whose father, Bob, is a two-time DIRTcar Summer Nationals champion (1992, 1995). “It’s so hard to win these things. You’ve got the best of the best. I’m so glad to finally get one. It’s amazing.” 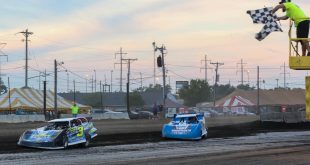