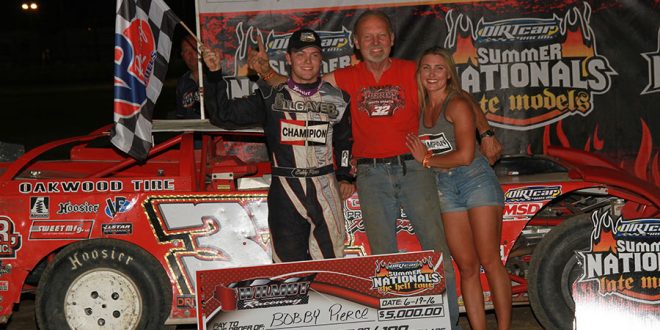 Bobby Pierce Looks for a Repeat of Summer Nationals Success

From a storied racing family, Pierce is looking to make history of his own

CONCORD, N.C. – June 20, 2016 – It is a story 19-year-old Bobby Pierce Jr. can laugh about now, and that is just what he did when he told it. But to his credit, this particular step was big for a four-year-old. Pierce Jr. grabbed hold of a quarter midget for the first time then, and it was nothing like skating his toy cars across the Vermilion County Speedway grandstands.

It only lasted one day. The throttle got the best of the little daredevil, who drove the cart right into the side of his father’s pickup truck. He called it quits. It was scary yet humbling experience. But there was still something so intriguing about racing to him. Maybe it was because of his lustrous bloodline or the simple fact that he has been around racing since birth. Being the typical curious kid, he still wanted to find out why it interested him so much, though it scared him.

The Oakwood, Ill. rising-star became the youngest driver ever at 18 years-old to win the DIRTcar Summer Nationals title in 2015. Not only that, but he also joined his father Bob Pierce in becoming the first father-son duo to win Summer Nationals titles. He did start young; it is in his blood.

“I never thought I’d be doing it this young,” said Pierce Jr., who started racing late models at 13 years-old. “Now that I think about it, 13 [years-old] racing these things is pretty crazy. I always wanted to compete on this level. I just wasn’t sure how soon I’d be doing it.”

One year after the pickup truck mishap, he gave that quarter midget another go. This time Pierce Jr. was on a closed course at Vermilion. He managed to steer away from any trouble, but similar to his first experience the adrenaline was frightening. Mind you, his quarter midget lacked a part other carts had – a restrictor plate. His was a “full-bore, wide-open” one. No-holds-barred.

He learned throttle control – the reason why he is in fact the “Smooth Operator” now. Pierce Jr. ended up racing quarter midgets for almost three years until switching to four-cylinder modifieds in 2008. The following year Pierce Jr. made the switch to late models, claiming the track championship at Vermilion in the crate division. He hopped into a super late model in 2010.

The true test in super late models is the competition, though he is a back-to-back DIRTcar Late Model National Champion. Despite having grasped throttle control, he said it is difficult being “silky smooth” when the rest of the field puts the pedal to the metal.

“It’s either all you got or you might as well not be doing it at all,” Pierce said. “The competition is just so stiff [at this level]. But with my dad’s experience, it really helps me a lot…with him building the cars and everything. We’ve had a lot of good times over the years.”

Bob Pierce Sr., an inductee into the Dirt Late Model Hall of Fame in 2003, is his son’s crew chief. Though retired, Pierce Jr. said he can tell he has more fun watching him more than he did racing. This was especially true after Pierce Jr. locked-up the 2015 Summer Nationals title at the final race at Oakshade Raceway in Wauseon, Ohio.

“He was pretty emotional,” Pierce Jr. remembers. He got teary-eyed the final night when it was all said and done. It was a long tour, and we won it by 10 points. It got really close at the end. The whole thing is an accomplishment in itself just because it takes a toll on you. He was very proud.”

As for the National Championship, he won the series by a larger margin of 121 points. The irony of this was that he solidified the championship at the DIRTcar UMP Track of the Year, Eldora Speedway. Besides Vermilion, Pierce Jr. basically grew up at Eldora. The track, less than 200 miles away, is where his father regularly competed. So, it was a crazy coincidence to Pierce Jr. to seal the deal at that particular track. It was one of those “full-circle” feelings.

“I just remember being up there, playing with little toy cars,” said Pierce, who brought his cars with him to each track. “Now I’m competing against all these Illinois guys I looked up to as a kid.”

Pierce collected $45,000 in total winnings from both championships, but the experience was like none other. It was invaluable. The “Hell Tour” for Pierce Jr. is a testament to what he has learned in such a short career, and the help he has received along the way – especially from his father.