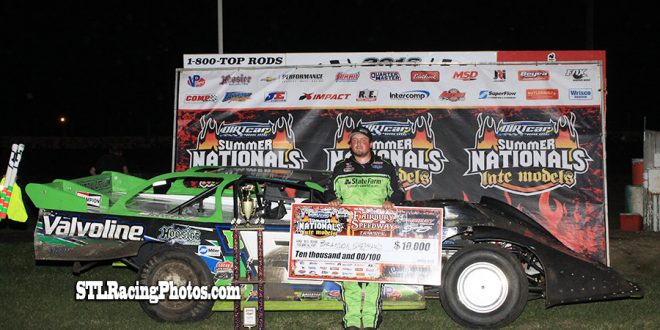 FAIRBURY, Ill. – June 25, 2016 – It was not an easy win, but Brandon Sheppard held tough and fought back challenges Saturday night at Fairbury American Legion Speedway to claim his first Summer Nationals victory of the season.

Sheppard started the feature on the outside pole with veteran Billy Moyer next to him. Moyer jumped out to an early lead. Sheppard got around him on lap three but Moyer battled back. He cruised through the next 20 laps with Sheppard glued to the high-side of the track and fighting to maintain his second place position, which he lost briefly at the midpoint of the feature.

Sheppard found another opening on lap 26 and held the top spot for two laps but Moyer again battled back to the lead. This time, Shannon Babb was on the move and took the top spot from Moyer – but again, only briefly. On a lap 35 restart, Sheppard, who at that point was in fourth, blasted forward retaking third from Jimmy Mars, then second from Moyer. Using that high line, Sheppard then fought past Babb to retake the lead.

It was smooth sailing to the end.

“I knew I just had to hit my marks and not bobble,” Sheppard said. “The cushion was like a one-foot brick wall all the way around the top. It was really hard. And the tire rule that we’re on, my left-rear (tire) would die after about five laps and I’d just have to run sideways all the way around the corner and hope not to push, because my right-front wouldn’t steer either. We just tried to hit our marks and keep everything together, and we did.”

The DIRTcar Summer Nationals returns to action on Sunday at Tri-State Speedway in Haubstadt, Ind.