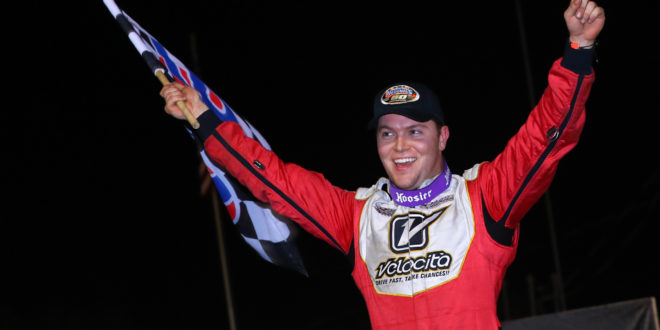 After a dominating heat race, Bobby Pierce said he was gonna win it; and he did just that.

The Smooth Operator led all 30 laps on Tuesday night at Volusia Speedway Park, earning the first-ever gator trophy of his career by checking off a victory at the 50th DIRTcar Nationals.

“I was pretty nervous there,” Pierce admitted. “Devin [Moran] and I are good buddies and that was probably one of the funnest races we’ve had together. At the end, I saw he was in second on the board and Cody [Mallory’s] sticks were getting closer and closer. I kept thinking if I’m cut out for this stuff, surely I can handle ten more laps, and thankfully we held on.”

Earning the pole position over a 51-car field of DIRTcar Late Models, Pierce claimed the hole shot in his #32 and held on to lead all 30 laps at the Barberville, FL half-mile. It wasn’t without a firm challenge from his good buddy, Devin Moran, though.

The slightest bobble off turn four on the 16th circuit opened the door for Moran and he came through with a massive slidejob into turn one. He slid his #9 Longhorn Chassis in front of Pierce’s nose, but the the Oakwood, IL native was locked and loaded to counter his move with a perfect crossover move.

“I really don’t know how I pulled off that crossover in the slick,” Pierce thought. “I timed it just right, but I think about took his left front off making that move work. I don’t know if he had to lift or what. I heard him going under me down the front stretch, and figured something was probably coming into turn one. I tried to set it up to counter and it worked perfectly.

From there, Pierce survived and crossed the finish line with a 0.828-second advantage over Moran to claim his first-career gator trophy from Volusia’s DIRTcar Nationals.

Moran, a native of Dresden, OH, continued his excellent week with his second-straight podium. He finished third in Monday’s opener and bettered that with a runner-up bid on Tuesday.

Rounding out the podium behind Pierce and Moran was fellow young gun, Hudson O’Neal.

“Overall, it was a really good night,” O’Neal said. “I think we were better than what we showed there. We just didn’t take full advantage of it. It was a good first night, but we’ve still got a long week here. Hopefully the speed carries over.

The 50th DIRTcar Nationals continues on Wednesday, February 10 with a dose of the Super DIRTcar Series Big Block Modifieds and the first of four nights with the World of Outlaws Morton Buildings Late Model Series.

If you can’t be here in person, you can catch all the action LIVE on DIRTVision.