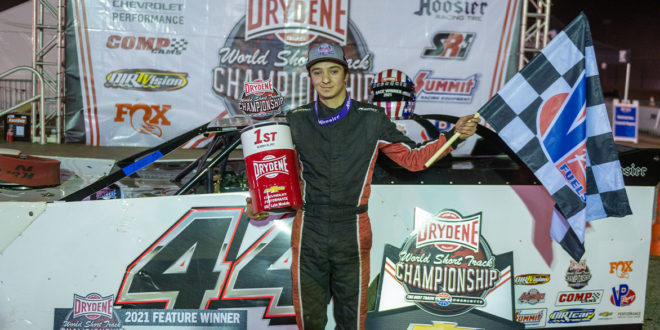 The Lincolnton, NC driver has a Victory in back-to-back years at the Drydene World Short Track Championship

The Lincolnton, NC driver’s bid for a Fox Factory Pro Late Model win ended in heartbreak on his roof Friday. But he still had a chance for redemption in the Chevrolet Performance 602 Late Models.

He earned that redemption Saturday night, diving underneath Rod Tucker for the lead on a restart and holding on to win Saturday’s Feature at The Dirt Track at Charlotte.

Ruggiero stated he knew Saturday was his chance to make up for Friday’s misfortune.

“Obviously (Friday) didn’t go as planned with us tearing up that 604 car,” Ruggiero said. “I told my dad when I got back to the trailer that I was obviously sorry about what happened, but that I was going to make up for it in the 602. I’m not going to lie to you I knew I had to get up on the wheel and get it done for my dad.”

The Tar Heel State campaigner’s pass for the win came on the bottom of the speedway as he dove under Tucker in the middle of Turns 3 and 4. It was a line he continued to use after taking the top spot.

“We ran the top for the first couple of laps, and I knew it wasn’t quite working for me,” Ruggiero said. “I didn’t have the side bite I needed through the crumbs, so I knew I needed to hunt the bottom; I just didn’t think it work that well.

“I was just thankful to stay out front and just stay out of trouble.”

Ruggiero now has back-to-back victories at the event after earning the Pro Late Model Feature win in 2020.

Only 19 of the scheduled 25 laps were complete as the Feature reached its time limit.

Those six laps may have played into second-place finisher Daniel Parker’s favor. He stated he thought he had a chance to win if the race went its regularly scheduled distance.

“I think we would’ve definitely pulled a slider at the end and made things a little interesting, but we got to get the show moving,” Parker said. We don’t have too many laps on this thing; I think it’s my second or third race. We usually run modifieds and stuff.

“Racetracks like that, I feel like I have a little bit of an advantage being used to the little tires.”

Bryan Mullis crossed the line third, dropping a spot from his outside pole starting position. He hoped the car would tighten up more than it did toward the end of the race.

“After running that 604 race, I feel like that car is real neutral,” Mullis said. “Normally, I can maneuver around with it, but it just didn’t tighten up enough. I’m not saying the outcome wouldn’t have been any different, but I think I could’ve gave John (Ruggiero) a run for his money.”