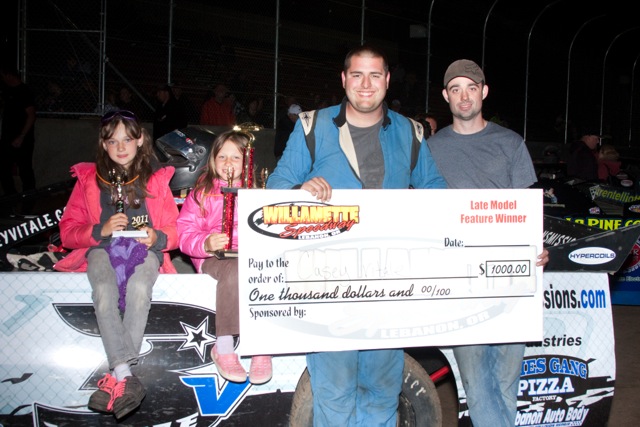 Lebanon, Oregon- It looked as if Albany driver Casey Vitale’s terrific night at the Willamette Speedway would result in a second place finish until on lap twenty-six he made a move for the race lead and went on to capture the victory.  The X-Factor Race Cars/Trademark Transmissions #3V won the first DirtCar Super Late Model feature of the season at the Lebanon facility in front of a large crowd after starting deep in the field.  Even before that point the team was having a grand night out already picking up the quick time award along with the trophy dash.

For Vitale to grab the lead he had to get around La Pine chauffer Trent Elliott in the VisitLaPine.com/Triple A Home Inspection #4E Victory Circle Chassis entry who had since led from three up until lap twenty-five.  Elliott attempted to rally late but ran out of laps to finish the evening second in the feature.  Behind Elliott in the finishing order would be defending champion Rob Mayea of Bend who made some key passes to move forward in his J&S Farms/Cornett Racing Engines #37 Victory Circle Chassis.

Three stoppages occurred in the feature including a big wreck in the first set of turns in the early stages which required the red flag.  The balance of the top five consisted of two drivers from Albany Randy Boyd in the Virgil Hanson Automotive Machine #94 Rayburn, via the B Main, and Brian Smith in the Virgil Hanson Automotive Machine #40 Rocket entry.

Fast time of the night was Casey Vitale amongst the thirty-five entries with a time of 14.920 seconds as well as earning the victory in the trophy dash.  Heat races were won by Portland’s Joey Tanner in the Jody’s Nothin But Fun Bar & Grill/X-Factor Race Cars #111, Randy Boyd, Trent Elliott, and Brian Smith.  Two fifteen lap consolation events were ran with the top three finishers transferring to the main event.  In the first consolation race Justin Duty of Happy Valley driving the Don Frank Flooring #15 Rocket, Scio’s Steve Moore in the Xtreme Motorsports #21 Mastersbilt, and Dan Deibele of Lebanon in The Knothole Market #74.  The second consolation event seen Brady Sell of Salem in the Leftcoast Motorsports #4 Swartz win followed Randy Boyd, and the Taylor’s Restaurant Equipment #18 of Blaine Taylor from Creswell.

The DirtCar Super Late Models return back in action for the Clair Cup this weekend.  The event will span two days of racing in memory of longtime track owner and promoter Clair Arnold.  Saturday May 26th and Sunday May 27th are the dates for those upcoming events if you would to find more information on the Willamette Speedway log on to www.trophymotorsports.com.