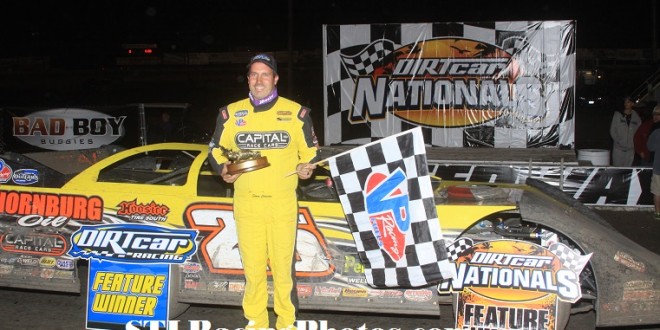 The Zebulon, Ga., racer added another piece of prestigious hardware to his expansive collection Monday night, earning his first Gator trophy with a victory during the opening night of the Late Model portion of Volusia Speedway Park’s 44th annual DIRTcar Nationals.

“This feels real good,” the 39-year-old Clanton said after lifting the first of six Gator trophies to be awarded to the winners of this week’s six DIRTcar Nationals A-Mains at Volusia’s half-mile oval. “One of those things has eluded me for a long time. We’ve run good down here, just haven’t had Lady Luck on our side. Right now everything’s clicking.”

Continuing his terrific start to the season, the fifth-starting Clanton overtook Darrell Lanigan of Union, Ky., with four laps remaining in Monday’s 30-lap DIRTcar Late Model-sanctioned main event on his way to claiming his second victory of the season.

Lanigan settled for second, 1.803 seconds behind Clanton. Crossing the finish line just before his engine expired, Tim McCreadie of Watertown, N.Y.., finished third to give World of Outlaws Late Model Series regulars a top-three sweep. Rodney Sanders of Happy, Texas, was fourth with Casey Roberts of Toccoa, Ga., rounding out the top five in a race slowed by two cautions.

After struggling through one of the worst years of his career in 2014, Clanton has been on fire to start the new season. He’s finished no worse than seventh in the seven races he’s entered and holds the early lead in the WoO LMS points chase after scoring a victory and three more top-five finishes in four races on the national tour’s 2015 campaign.

“Marshall Green and Capital Race Cars and my father-in-law (and car owner) Ron Davies give me everything I need to come out here and do this deal,” said Clanton, whose Clements-powered Capital machine carries sponsorship from Weldbank Energy and Hornburg Oil. “My crew chief Brock (Wise) has come back this year and made a world of difference. We’re gelling good and everything’s going good right now.”

Mastering Volusia’s high-speed surface, Clanton quickly advanced to second from his fifth starting spot but waited until the race’s closing laps to attempt a move on Lanigan. After erasing Lanigan’s nearly straightaway lead, Clanton edged ahead on the back straightway on lap 23, only to give the spot back when a slower machine blocked his low lane in turns three and four.

The race’s final caution one lap later gave the leaders clear track for the final run to the finish, allowing Clanton to display his superiority. He pulled even with Lanigan on lap 25 and completed the low-side pass exiting turn two on lap 26.

“I got by him there (on lap 23), but the (slower car of Mason Zeigler) was in the bottom and blocked my line,” Clanton said. “I knew I had a good race car early in the race and was just biding my time and just saving my tires as long as I could. When it was time to go I went.”

Lanigan, the three-time and defending WoO LMS champion who has struggled to match his dominant 2014 performance level so far this season, settled for his sixth top-five finish in 11 races this season but for the second straight night was denied a victory after starting the A-Main from the front row.

“Second sucks, but Shane did a great job,” said Lanigan, who also started from the outside pole of Sunday’s WoO LMS A-Main at nearby Bubba Raceway Park in Ocala, Fla., but was never a factor before dropping out of the race. “We’ve got a new piece here that’s a pretty good hot rod. We’ll see what we can get together for tomorrow night and see if we can’t win tomorrow night.”

The first of the two breaks in Monday’s A-Main action occurred when Rick Eckert of York, Pa., ran into the back of Kyle Brunson’s slowing car. The contact sent Eckert’s car airborne as it completed a single barrel roll before coming back to the ground. Eckert emerged uninjured, but his new MasterSbilt by Huey machine suffered heavy damage.

Polesitter Billy Moyer of Batesville, Ark., saw his race come to an early end when mechanical issues forced him to retire during the red flag following Eckert’s wreck. The race’s other caution appeared when Sanders tangled with Earl Pearson Jr. of Jacksonville, Fla., sending Pearson spinning from the sixth position.