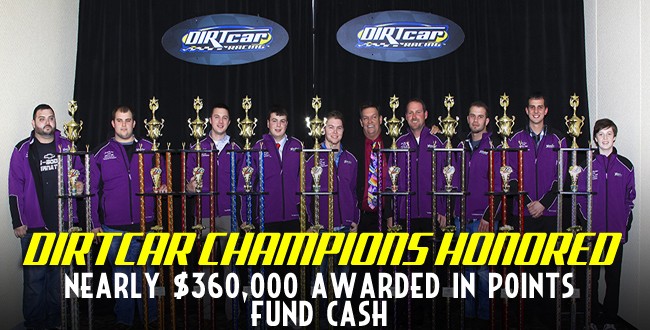 Nearly $360,000 in points-fund cash distributed to drivers for their success during the 2015 season

In front of nearly 1,000 competitors, family and friends in the ballroom of Springfield’s Crowne Plaza Hotel, almost $360,000 was distributed to competitors in recognition of their success during the 2015 DIRTcar season.

Harrison, a native of Highland Creek, Ill., put together a season for the record books. In all, he recorded 36 wins as well as 11 top-five and three top-ten finishes in 60 starts. Harrison’s fourth modified national championship ties Jimmy Owens’ four titles.

For Pierce, the season was one to remember. In addition to back-to-back DIRTcar Late Model National Championships he became the youngest ever driver at 18 years old to win the Summer Nationals title. He also joined his father Bob Pierce in becoming the first father-son duo to win Summer Nationals titles. Pierce joined esteemed company in winning both titles during the same season.

Throughout the season, the Danville, Ill.-native picked up 16 wins including eight straight to wrap up the season. With his win at Eldora Speedway’s UMP Fall Nationals, he locked up the national title over Rusty Schlenk by 121 points.

Jose Parga, of New Berlin, Ill., was the 2015 DIRTcar Pro Late Model Champion and took home the night’s third largest prize of $10,000. He stood in victory lane at DIRTcar sanctioned events 15 times during the season.

Eldora Speedway, was named the 2015 DIRTcar UMP Track of the Year for its commitment to drivers, teams and fans and its advancement of DIRTcar and grassroots racing. The track plays host to The World, “The Biggest Dirt Race In The World”™, and the $100,000-to-win Dirt Late Model Dream® – “The World’s Richest Dirt Race”™. Eldora is also home to the season ending DIRTcar UMP Fall Nationals. This is the first time Eldora has won the award under the ownership of Tony Stewart and stewardship of track General Manager Roger Slack.

Adam Webb, of Decatur, Ill. was the DIRTcar Sports Compact National Champion as well as the top driver in the west region. Webb won 20 features during the season and took home a combined $1,200 for his two titles

In the DIRTcar Factory Stock national points standings, it was Jacob Rexing of Brighton, Ill. who came out on top. Rexing had 14 wins during the season. He received $1,000 for his championship.

With 22 wins on the year, Lukes Gash was the winner of the DIRTcar Stock Car national title. The Chebanse, Ill.-native was also the top driver in the North Region. His combined points fund award was $3,200.

Robbie Eilers was honored for his DIRTcar Pro Modified Series national title. Eilers had 12 wins throughout the season and received $1,000 from the points fund.

With 19 wins, Tyler Cain was the top driver in the DIRTcar Sportsman National points standings and Sportsman East points. For his top finishes in both he received $3,200 from the points fund.

State and regional champions recognized during the banquet included:

Several other special awards were handed out during the banquet.

Nick Kurtz, of Greenville, Mi., won four times during the 2015 season, placed third in the Michigan region and 23rd in the DIRTcar Late Model national points on his way to being named the 2015 Rookie of the Year.

STLRacing.com’s Jimmy Dearing was honored with the Bob Memmer Achievement Award. Dearing has built STLRacing.com into one of the premier racing news sites in the Midwest and helped to promote grassroots racing in the region.

The 2016 DIRTcar UMP Modifieds kick off their season on Jan. 28 at East Bay Raceway in Gibsonton, Fla. Following four nights at East Bay, the series takes on Bubba Raceway Park in Ocala, Fla. and North Florida Speedway in Lake City Florida. The series wraps up its Florida swing Feb. 9 to 16 at the 2016 DIRTcar Nationals at Volusia Speedway Park.

The DIRTcar Late Model Series begins 2016 at North Florida Speedway in Lake City, Florida on Feb. 7. The Late Models then head to Screven (Ga.) Motor Speedway on Feb. 12 and 13, Bubba Raceway Park on Feb.14 and DIRTcar Nationals at Volusia Speedway Park Feb. 15 to 20.