DIRTcar Download is your source for everything in DIRTcar Racing. Throughout the season, you’ll find weekly news, notes and track and driver spotlights from across DIRTcar Racing’s regions.

Davenport resides Kentucky while Ashby hails from Tennessee, making their battle a significant border war. In the past two weeks the point scuffle between the two DIRTcar Southern Region competitors has heated up, with Ashby erasing Davenport’s three-point edge last weekend to claim the national points lead by eight markers entering this weekend’s competition.

That’s not all for the Monster Midwest Tour this weekend. Action resumes at Kamp Motor Speedway in Boswell, Ind., on Saturday (April 25) and caps off a full racing weekend with a visit to Lincoln (Ill.) Speedway on Sunday (April 26).

More information on the Monster Midwest Series can be found at http://www.monstermidwestseries.com.

A Jewel of an Event: After Mother Nature claimed the first scheduled event of the 2009 Advance Auto Parts Super DIRTcar Series for big-block Modifieds last month at Hagerstown (Md.) Speedway, the tour looks to break out for the 2009 season on Sunday evening (April 26) with a 75-lap event at Big Diamond Raceway in Minersville, Pa.

The coal region track will open its gates to the best in the big-block Modified business for the Spring Fever 75, which offers a $6,000 top prize.

Big Diamond’s pit gates and grandstands will open at 2 p.m. Practice is set to begin at 5:15 p.m., followed by Big-Block Modified Integra Shocks Time Trials. Qualifying heats are scheduled to go green at 6:30 p.m. The event will carry a rain date of Mon., April 27, if needed.

General Admission grandstand tickets at Big Diamond are $20 (kids 10 yrs. and under are free) and pit passes cost $30 each.

Western AllStars Head For Santa Maria: Fresh off of a great event at Chowchilla (Calif.) Speedway last Saturday night in which Kellen Chadwick scored his biggest win since suffering near-fatal injuries in a February 2008 accident, the DIRTcar Western AllStars Late Model Series gets a break in preparation for the next scheduled event on Sat., May 9, at Santa Maria (Calif.) Speedway.

DIRTcar Northwest I-5 Tour Kickoff A Month Away: Fans in the Northwestern United States are counting down the days until the newest series under the DIRTcar Racing banner takes the green on May 22 at the famed Cottage Grove (Ore.) Speedway in Oregon.

The tour’s opening weekend will also include a two-day Memorial Day Weekend show on May 23-24 at Willamette Speedway in Lebanon, Ore.

For all the latest DIRTcar Racing news and information, visit DIRTcar.com. If you’re a member or would like to become a member, visit DIRTcarMembers.com. 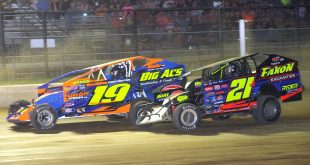