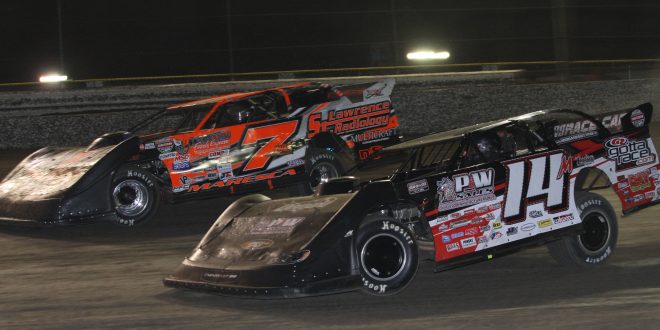 Mike Maresca and Morgan Bagley at the 2018 DIRTcar Nationals

BARBERVILLE, FL – Jan. 25, 2019 – When those in the motorsports world think about the start of any racing season, their minds automatically revert to palm trees and warm temperatures of Florida in February. Dirt track fans’ minds wander to the famous Gator Pond at the World’s Fastest Half-mile, Volusia Speedway Park.

The first week of DIRTcar Nationals caters to the open-wheel fans, while the second week indulges full-fender fans with two action-packed nights of DIRTcar Late Models followed by four straight nights of the World of Outlaws Morton Buildings Late Models.

In 2018, Jonathan Davenport scored his first career feature win at Volusia in what would be the lone DIRTcar Late Model feature. The next night was won by Mother Nature before the World of Outlaws Late Models took the field.

2006 World of Outlaws Champion Tim McCreadie kicked things off with his first feature win in a Super Late Model at Volusia since 2013 and sixth of his career. It was also his first World of Outlaws triumph since 2015. Later in the week, McCreadie would bag a second Gator with the Super DIRTcar Big Block Modifieds and eventually the 2018 DIRTcar Nationals crown.

To wrap up the week, 2004 World of Outlaws Champion Scott Bloomquist grabbed career win #12 and first since 2016, while 2017 World of  Outlaws Champion Brandon Sheppard bagged his only Volusia triumph of 2018 and second of his career.

With three second place finishes, one fourth place, and even one 25th place run, Chris Madden walked away with the Big Gator as the 2018 DIRTcar Nationals Champion — for the first time. The Gray Court, SC star later went on to place third in the chase for the 2018 World of Outlaws Late Model Series Championship with eight feature wins, 25 top fives and an astounding 33 top 10s in 40 starts.

The premier cars and stars in the full-bodied world mark the month of February as a time to establish their mark and show what the future could hold for the rest of the season. Since that game-changing day of February 14, 2005, when York, PA veteran Rick Eckert collected the first-ever DIRTcar Late Model feature win at DIRTcar Nationals, there have been 23 different winners in the 41 races conducted.

Since 1972, there have been 215 overall dirt Late Model features conducted at Volusia Speedway Park.

Whatever date you begin from, however, the same name tops the list. Six-time DIRTcar Summer Nationals Champion and National Dirt Late Model Hall of Famer Billy Moyer leads the way with 19 overall career wins at Volusia, including 10 since 2005, with six of those coming in DIRTcar Late Model competition.

His last DIRTcar Late Model checkered flag came in 2012, while his last overall victory at Volusia came in a Word of Outlaws Late Model race a year later in 2013. The Batesville, AR legend scored his first victory at Volusia back in 1985. In 2016, his son, Billy Moyer Jr., joined him on the winners list as the second father/son combination to score feature wins after Jack Boggs (1981) and his son, Jackie Boggs (2004).

Between 1972 and 1976, Wayne Shugart recorded nine victories, which has stood the test of time all these years later at fourth all-time in career feature wins. Jack Boggs and Don O’Neal are tied for fifth at eight victories apiece with O’Neal winning the 2017 finale, a World of Outlaws event, on February 25 — his first win at Volusia since February 15, 2011. That win broke a tie with 2011 World of Outlaws Champion Rick Eckert, who last visited the winner’s stage on February 17th, 2006, some 12 years ago. Eckert stands alone in seventh with seven wins.

2015 World of Outlaws Champion Shane Clanton has been the one to beat in recent seasons having captured two DIRTcar Nationals titles in 2015 and again in 2017. Only Richards briefly stopped that string in 2016. The Zebulon, GA standout has scored all six of his DIRTcar Nationals feature wins since 2015 with one of those coming in a DIRTcar Late Model event, while the other five have been in World of Outlaws competition. His first DIRTcar Nationals title in 2015 propelled him to his eventual World of Outlaws championship that same year. Clanton is tied for eighth all-time overall at Volusia with six, sharing that honor with Larry Moore, Freddie Smith and McCreadie who collected win #6 in 2018.

With car counts in the 50s and up, DIRTcar Nationals sets the tone for the remainder of the season.

Moyer leads all drivers with six DIRTcar-only feature wins, while Richards is tied with Bloomquist for second all-time in DIRTcar Late Model-only victories with four. McCreadie stands alone in fourth with three wins, as five drivers are tied for fifth all with two victories apiece.

After DIRTcar Nationals, the DIRTcar Late Model teams shift focus to the remainder of the 2019 season. Many of the teams will look ahead to the 34th annual DIRTcar Summer Nationals Hell Tour starting on Wednesday, June 12 at Peoria Speedway (IL). The schedule features 28 races over 32 days covering about 3,800 miles from Illinois to Indiana, down to Tennessee, back to Kentucky, Missouri, Wisconsin and Michigan before finally crowning at champion on Saturday, July 13 at Oakshade Speedway (OH).

New in 2019, fans will be able to follow the entire tour LIVE on DIRTVision with a Late Model Fast Pass when the event isn’t at their home track. Know the stories before you get to the track by following along every night!