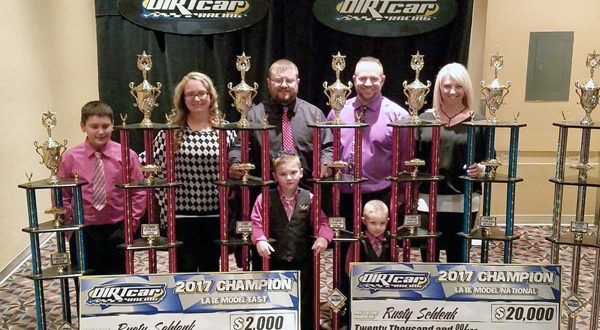 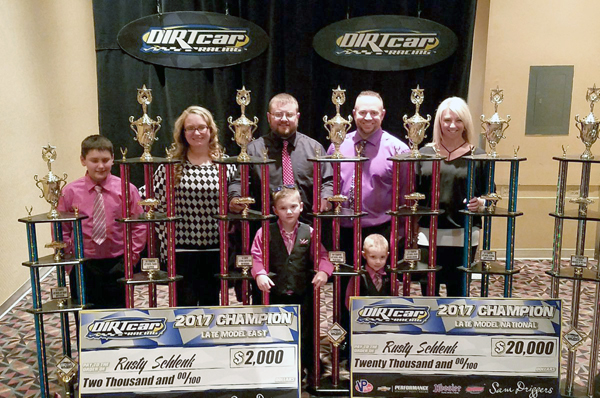 SPRINGFIELD, IL — Jan. 14, 2018 — Champions from around the country were honored on Saturday, January 14th during the 34th Annual DIRTcar Racing Tribute to Excellence National Awards Banquet at The Crowne Plaza in Springfield, IL. National and regional champions across 10 divisions were honored for their accomplishments from the 2017 racing season as over $360,000 in points fund money was distributed throughout the gala evening.

Highlighting the night was the accolades of now two-time DIRTcar Late Model national champion, Rusty Schlenk who added the 2017 crown to his 2010 title, becoming just the eighth driver in the 34-year history of DIRTcar to win more than one national title. The 31-year-old standout, originally from Jackson, MI now calls McClure, OH home and visited Victory Lane 21 times overall in four different states during the 2017 racing season in his #cj1 C.J. Rayburn by RSR machine.

Schlenk would also walk away with his fifth DIRTcar East Regional Championship while also finishing second in points in the Sunoco American Late Model Series where he is a four-time series champion, scoring three of his wins there. Schlenk also grabbed seven of his feature wins (two within the Sunoco American Late Model Series) at his home track of Oakshade Raceway, where he finished fourth in points despite missing three nights. In winning his second national title, Schlenk went home with over $22,000 in DIRTcar points fund winnings. For the 2018 racing season, Schlenk will chase after the Rookie of the Year title in the World of Outlaws Craftsman Late Model Series.

For the sixth time of his career, Mike Harrison would be crowned the DIRTcar UMP Modified national champion. The 42-year-od from Highland, IL scored an impressive 37 feature wins in 61 starts during the 2017 racing season. He also collected his fifth Summit Racing Equipment Modified Nationals title with six of his victories coming in the support tour for the DIRTcar Summer Nationals. Harrison also grabbed the DIRTcar UMP Modifieds Illinois/Missouri regional championship, the third regional title of his career. His sixth title, the most of any driver all-time in the 34-year history of DIRTcar, netted him the highest payday of the night at $27,000 at the awards banquet.

More divisions crowned their DIRTcar national champions, including Allen Weisser, who had a busy 2017 racing season and was rewarded with his first career DIRTcar Pro Late Model national title. The Peoria, Illinois driver scored 20 feature wins and the track championship at Farmer City Raceway (IL). He also drove his DIRTcar UMP Modified to a sixth place finish in the national points with 15 additional feature victories and second in the DIRTcar UMP Modified Northern Illinois regional points. For his PLM national crown, the 24-year-old collected over $10,000 for his efforts.

Tim Hancock repeated as DIRTcar UMP Pro Modified national champion as the Mt. Olive, IL driver scored 22 feature wins in 2017 as well as the track championship at Macon Speedway (IL). Another driver who repeated as national champion was Paragon, IN’s Steve Peeden who collected his second straight DIRTcar Sportsman title on the heels of 14 feature wins. He also grabbed the DIRTcar Sportsman East Regional title for the second year in a row as well.

Dallas Lugge would be crowned the 2017 DIRTcar Sport Compact national champion. In addition to his first national title, the Belleville, IL driver, who recorded an impressive 23 feature wins in 2017 also won the DIRTcar Sport Compact West Regional title as well as picking up the track championships at Federated Auto Parts Raceway at I-55 (MO) and at Tri-City Speedway (IL). Garrett Saunders is the 2017 DIRTcar Pro Sprint national champion as the Lakeville, IN pilot also scored the track championship at Plymouth Speedway (IN) while recording 10 feature wins.

14-year-old Dominic Metzke was crowned the 2017 DIRTcar Kid Modz champion as the Troy, IL teenager recorded nine feature wins at six different tracks including five in a row at one point during the season. The five-race winning streak propelled the Prairie State teen to his first national title.

The DIRTcar UMP Modifieds kick off the 2018 racing season at East Bay Raceway Park in Tampa, FL from January 24-27th to kick off the track’s 42nd annual Winter Nationals. On Wednesday the 24th, the Mods go for $1,000-to-win; while on Thursday-Friday the 25-26th, they’ll race for $1,500. On the final night on Saturday the 27th, the open-wheel gladiators will race for an impressive $5,000 payday.

After four days at East Bay, it’s onto North Florida Speedway in Lake City, FL from Feb. 2-4 for the Modifieds. The first two nights, on Thursday-Friday, Feb. 2-3, they’ll race for $1,500 to win each night before vying for a $2,500 payday on Sunday, Feb. 4. Their full-fendered counterparts of the DIRTcar Late Models join the Modifieds on Sunday the 4th for a $5,000 payday.

Then it’s onto the 47th Annual DIRTcar Nationals, which are set for February 6-17th at Volusia Speedway Park, located west of Daytona Beach in DeLeon Springs, Florida. The DIRTcar UMP Modifieds kick things off on Tuesday, February 6th and will race for seven straight nights from the 6-12th with the $5,000 to win Gator Championship wrapping up their portion of #FLinFeb on Tuesday, February 12th. The DIRTcar Late Models will race twice on February 12-13th before the World of Outlaws Craftsman Late Model Series take over for the rest of the week on February 14-17th.

The Arctic Cat All-Star Circuit of Champions Sprint Cars (February 7-8th) and World of Outlaws Craftsman Sprint Car Series (February 9-11th) join the DIRTcar UMP Modifieds for those nights while the Super DIRTcar Big Block Modifieds are in action with the Late Models over five nights of racing starting on Tuesday, February 13th and going until Saturday, February 17th.

For more information about the 47th annual DIRTcar Nationals and to order tickets, please call: 1 (844) DIRT-TIX or visit dirtcarnationals.com. Follow DIRTcar Nationals throughout the off-season and into the month on Twitter.