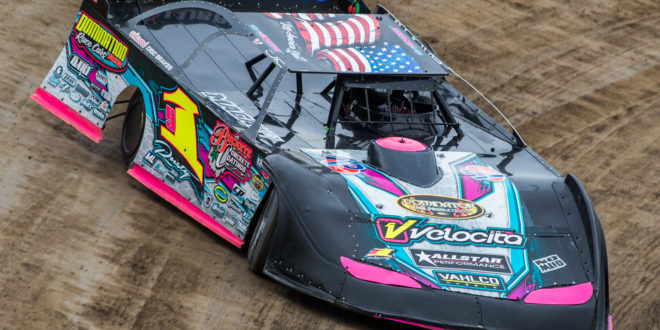 CONCORD, NC – June 5, 2020 – For something he designed with his crew chief in a pole barn behind his house, Rusty Schlenk sure has been making a statement with the newly designed Domination Race Car lately.

For several years, the Ohioan piloted the Midwestern favorite Rayburn Race Cars chassis to 40+ Feature wins in DIRTcar competition and was awarded the 2017 and 2018 DIRTcar Late Model national points championship titles, using the tips and tricks he was given from famed chassis builder CJ Rayburn.

Two national titles, an overcrowded trophy cabinet and tens of thousands of dollars in winnings earned for the 33-year-old during that span in Rayburn cars is a lot more than a lot of drivers can say they’ve won in their entire careers.

“I’ve never really felt confident going into the Summer Nationals that we actually had a shot to win the title. I just go into it with goals of finishing it and maybe running top-five, top-three in points. But honestly, this year I feel like we’ve got a car good enough to win the deal if we’ve got some luck on our side.”

But soon, Rayburn decided to call it a career himself. Fortunately, Schlenk had already been hard at work preparing to design and fabricate a chassis style of his own that took elements from the Rayburn he already had so much success with.

“We’ve been in the Rayburn deal for the last three years. I knew things were kinda getting slow for [CJ]. He didn’t really have any workers around there, wasn’t really selling many racecars. He’s 80 years old,” Schlenk said.

“I had actually been piddling around with building my own car a few months before CJ announced that he was quitting. I was just trying to get things in place because I knew it wasn’t going to be long. When I heard that he pulled the plug and wasn’t going to do it anymore, he tried to get me to come down and take the place over.”

In the end, Schlenk turned down Rayburn’s offer. It’s three-plus hour drive from Schlenk’s home in McClure, OH, to Rayburn’s race shop in Whiteland, IN, and the logistics just weren’t going to be practical. So, he went ahead and pulled the trigger on founding Domination Race Cars.

“I finally decided just to do it myself when he quit. It was either that or completely start over and go with a different brand, and we just didn’t have the money to do that. So, I just developed my own deal,” Schlenk said.

The first car made its debut last year at Duck River Raceway Park’s Deep Fried Fall Brawl. Schlenk strapped a Chevy Performance 604 Crate engine in the car and put a hurting on the field, lapping most of the 17-car roster before the checkered flag waved. In Qualifying, Schlenk said his fast lap in the Crate car was quicker than his best time in his Super Late Model.

“I was definitely not expecting it to be that good out of the gate. I knew we had a good piece; I knew we built a good car and I was confident in it. But when you build something from scratch out of your pole barn, you don’t expect it to go out there and kick everybody’s ass the first night,” Schlenk said with a laugh.

In the weeks that followed, Schlenk and the new car went on to find even more success in the national DIRTcar ranks, setting fast time at Cochran Motor Speedway, starting on the front row in the Arizona Sport Shirts Gateway Dirt Nationals finale and even leading some laps in the race before internal mechanical failures sidelined him before the finish.

Since the start of the COVID-19 pandemic this year, he and the rest of the DIRTcar Late Model community have found limited places to race, which means they’ve had to get creative in finding tracks to race on. Schlenk’s been all over the map in the last few weeks, scoring wins in Super Late Model action at Merritt Speedway, Clarksville Speedway and Oakshade Raceway.

Domination might only have a small following right now, compared to that of the long-standing, tried-and-true makes like Rocket, Longhorn and Capital. But Schlenk’s been keeping busy at the shop since the government-mandated lockdowns began in March, selling Domination cars to seven different drivers around the Upper Midwest region. Cody Bauer even took his to Merritt Speedway Victory Lane last weekend.

“There’s a lot of local weekend warriors out there that I’m trying to cater to,” Schlenk said. “I’m trying to keep the cost down on these racecars and give the local guy something that they can feel comfortable, no matter what their driving style is, to jump in it and feel comfortable and not have to completely re-learn how to drive. I think we’ve succeeded so far.”

Schlenk said he’s always been a big proponent of the swing-arm suspension he ran for several years in his Rayburn cars. It took approximately four years for him to perfect his chassis and suspension design for the Domination build, but the work he put in was all worth it in the end.

“It was a lot to take on, but I’m glad we did it. I don’t feel like I was quite prepared, but we made it work,” Schlenk said. “It took a little longer than anticipated, but we’re up and rolling now. I’ve got a little bit of money in the bank, we’ve finally got our heads above water, so I think from here on out it’s going to be smooth sailing.”

Looking ahead, his schedule might be uncertain, but at least he’s racing a little bit for now. Schlenk takes part in Eldora Speedway’s Dirt Late Model Stream Invitational for the DIRTcar Late Models this weekend, and has never come into the facility with more confidence than he has right now.

“The cars are working good. This is the best I’ve ever ran in my life. I feel we’ve got a car that I can go anywhere in the country with at this point and be competitive. That’s kinda what I’ve been missing over the last couple years,” Schlenk said.