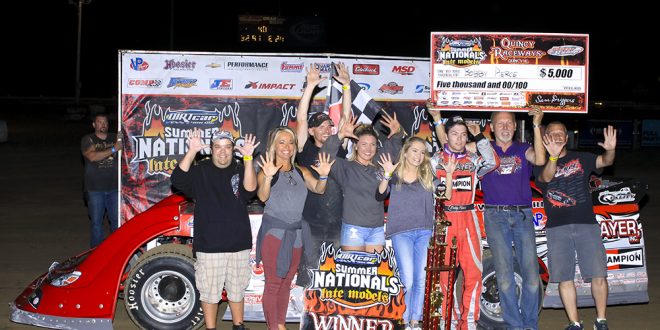 QUINCY, Ill. – July 10, 2016 – Bobby Pierce did something Sunday night few before him have done – he scored his 10th DIRTcar Summer Nationals victory of the season after a battle with Tyler Erb at Quincy Raceways.

Pierce, the 19-year-old from Oakwood, Ill., became just the fifth driver in Summer Nationals history to reach double-digit wins in a single season.

Erb, also 19 years old, started on the pole but it was Pierce with his smooth line around the track that took the early lead. Erb looked for a way around and with Pierce survived a mid-race crash in front of them, but was never able to get around.

“It was a different Quincy Raceway tonight,” Pierce said. “They kind of refigured the race track and made it a lot less banked. It was really bottom dominant.”

“When we took the lead that early, I was like, ‘all right, just settle down here and try to find a smooth line around the race track.’ And then, once we kind of got rolling there… it got pretty simple to just stay down there and try not to make a little mistake, and it worked out for us.”

Shannon Babb, in 2006, was the last driver to score 10 or more wins in a single season.

The DIRTcar Summer Nationals returns to action on Tuesday for the final countdown of events and the Champions Week at Plymouth (Ind.) Speedway.