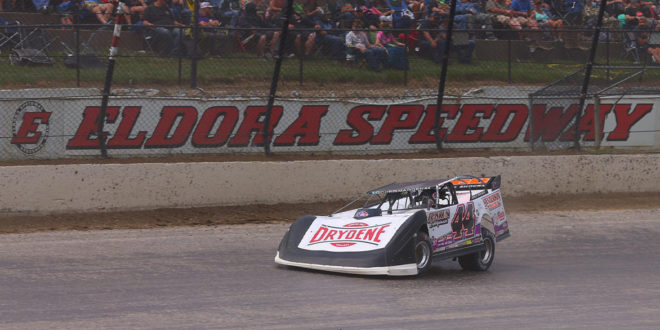 No invert for the “Dream’s” traditional six Heat Races

There’s no invert for the second time this week, after Overton, the high points scorer spun a zero on the “Wheel of Misfortune.”

While the Gray Court, SC driver, gained momentum, he had concerns after something went amiss on his car coming to the white flag.

“Something went wrong out there coming to the white flag; we lost a cylinder or something,” Madden said. “So, we got to get back to the pit and make an engine change or figure out what happened.

“If we get this fixed, I think we got a great shot at it. We’ve had a great race car every day.”

The good news for Madden is a wire came unplugged on his Rocket Chassis, so his crew will not have to make any significant changes before the Dirt Late Model Dream Heat Races.

Brandon Overton rolled past Devin Moran on a Lap 19 restart to score the win in the second preliminary Feature at Eldora Speedway.

It’s the Evans, GA driver’s seventh win at “The Big E” in the last two years, after not qualifying for the Eldora Million on Thursday.

Overton is optimistic in his quest for a third straight Dirt Late Model Dream.

“Yesterday and the day before, I was just trying to make it,” Overton said. “We’ve been working all week, and just nothing’s worked out for us.

“I’m happy to be back here. I hate it for Devin [Moran]. You just never know what to do when you’re leading.”

Overton will start on the pole of Heat Race one of the 28th Dirt Late Model Dream since there’s no invert.

Follow live coverage of the 28th Dirt Late Model Dream on all of DIRTcar’s social media channels and DIRTcar.com.