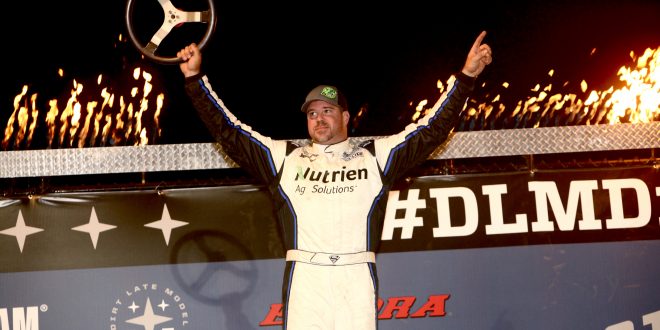 ROSSBURG, OH – June 7, 2019 – Redemption seemed to be the theme of the Friday night portion of Eldora Speedway’s Dirt Late Model Dream. Jonathan Davenport, of Blairsville, GA, grabbed a feature win just one night after giving it away on the last lap, and Shane Clanton, of Zebulon, GA, dominated the competition in his feature event and went to Victory Lane for the first time in Dream action since his $100,000 win in the 2012 finale.

Group A Competition
On Thursday night, “Superman” Jonathan Davenport set himself up for a tremendous run to a preliminary checkered flag, winning his heat race and redrawing the outside pole. He led every lap in his feature… except the one that mattered most. 2003 Dream winner Darrell Lanigan, of Union, KY, made a spectacular move on the final lap to get by Davenport and steal the win.

Davenport wasn’t exactly crushed by the outcome, as those runner-up points are very good, but said afterwards that he shouldn’t have been so hesitant to change lanes on the track to keep the momentum up. Friday night’s race, however, was a different story.

Redrawing the outside pole from a runner-up heat race finish, Davenport took the lead from 2017 Eldora Speedway Track Champion Kent Robinson, of Bloomington, IN, on lap two and never looked back, leading the next 24 laps to claim his fifth career Dirt Late Model Dream preliminary feature event. But it wasn’t exactly a brisk walk in the park…

The race started with smooth sailing for Davenport, until he ran into troublesome lapped traffic with 10 laps remaining. Mason Zeigler and Ashton Winger were battling it out at the rear when Davenport arrived at their bumpers, holding him up and allowing Robinson to close the gap.

Davenport said he could feel the pressure coming from behind, before doing what he failed to on the previous night – move up the track to get by slower traffic.

“I could watch the video board and I saw Kent Robinson getting a little closer to me,” Davenport said. “So, I went to the top one lap just to try it, I caught just a little bit of the cushion and that got me just enough of a run down the back-straightaway where I could clear Ashton.”

That decision proved to be the move of the night for the 2015 Dream winner, as it opened the gap between he and Robinson up just enough for the laps to run out.

Davenport is now the high-point man headed into Saturday’s big show and should find himself in the front of a heat race, ripening his chances to become a two-time Dream winner.

“Can’t thank the guys back at the Longhorn [chassis] shop enough, and my own crew guys that work on this thing,” Davenport added. “We’ve got a really good program right now, everything’s going good and I think we’ll be fine for 100 laps.”

Group B Competition
Before Friday night, it had been seven years since the last time Shane Clanton visited Eldora Speedway Victory Lane in a Dirt Late Model Dream. Now, “The Georgia Bulldog” is back, and prouder than ever to get another win this season for Capital Race Cars, on one of the grandest stages in the sport.

“This means a lot,” Clanton said. “We’ve come close in a couple preliminaries and led a lot of laps in the Dream and the World [100]. Hopefully, tomorrow, we can lead all 100 of them.”

Clanton put together a great, all-around effort in Group B action on Friday, winning his heat race and redrawing the outside pole. He swiped the lead away from Ross Bailes, of Clover, SC, at the drop of the green and floated through lapped traffic, leading all 25 laps to claim his first career preliminary Dream feature win.

Through all of the work that he, his crew, teammate Chris Madden and chassis builder Marshall Green have put into their program this season, Clanton said it was the little adjustments that made the biggest difference.

“We’ve changed a lot, not necessarily components on the car – just tweaking here and there,” he said. “It’s hard to make the right adjustments at the right time. That’s where we seem to struggle. We’ve got speed, we just need to make it at the right time.”

On Thursday night, Clanton said it was a mistake in his heat race that cost him a spot in the redraw and a subsequent top-five finish in his feature. But the veterans know how to leave the past in the past and keep searching for future improvements.

“We didn’t show up last night because we started further back and I messed up a little bit in the heat race,” he said. “If we would have gotten into the redraw, maybe started on the front row, maybe we could have won last night. We made better adjustments for the feature last night, we worked on that today and got it even better.”

What a weekend it has been so far for the driver out of Mt. Holly, NC, Chris Ferguson. After having such a rollercoaster start to his 2019 campaign (multiple mechanical failures, 2 wins), “Fergy Time” has found his stride at Eldora this weekend.

“We’ve been fast, but this year has just been up-and-down,” he said. “Any time you can put it together at one of the biggest races of the year, that just makes it even better.”

With an 11th-to-4th effort in Thursday’s feature, Ferguson followed it up with a second-place effort to Clanton in both his heat race and feature on Friday. Starting third in the feature and making the pass for second around Bailes on an early restart, Ferguson made every effort to catch Clanton, but came up just one spot short of his first career victory at Eldora.

“I would have loved to have been a little bit better to keep up with Clanton, but we’re tickled to death with second,” he said. “It was fun. The car was good, we needed a few adjustments and I think we could have been a little bit better, but we had a good race with Ross for second on the restart. Any time you can get a car to hook-up on this track, you’ve got to be happy, and we are with second.”

Two days down, one final main event to go! Saturday’s Dirt Late Model Dream action will get underway with hot laps at 6:30 p.m. ET, culminating with the 100-lap, $125,000-to-win finale! Log onto live.eldoraspeedway.com or tune into DirtonDirt.com to stream every lap live!