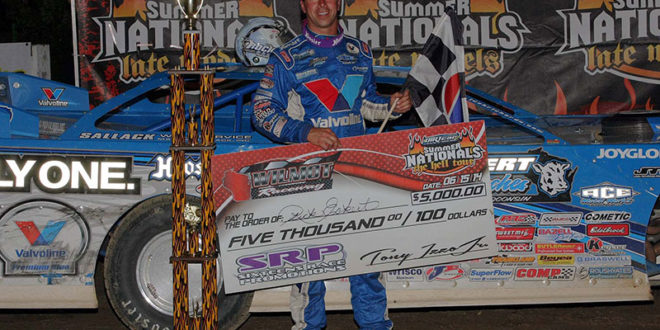 Eckert, of York, Pa., started from the pole position with Ryan Unzicker on his outside. Eckert, the 2011 World of Outlaws Late Model Series champion racing the defending series champion’s Rocket Chassis car, held off Unzicker on the start of the race and after two early cautions.

Eckert finally pulled away from Unzicker after the third and final caution when a hard-charging Shannon Babb, coming from his ninth-place starting position, challenged Unzicker for second. Babb cleared Unzicker, but Eckert was already out to a sizeable lead. Eckert wound up lead all 40 laps, defeating Babb by more than one second, capturing his second checkered flag in as many events.

“Anytime I get to race is fun, and I love racing tracks that I’ve never been to,” said an excited Eckert in victory lane. “We were only going to hit a handful [of events] but now every day I get in the truck, I go wherever they set the GPS to, and they’ve been setting it for the next track. So we will probably see them at the next one.”