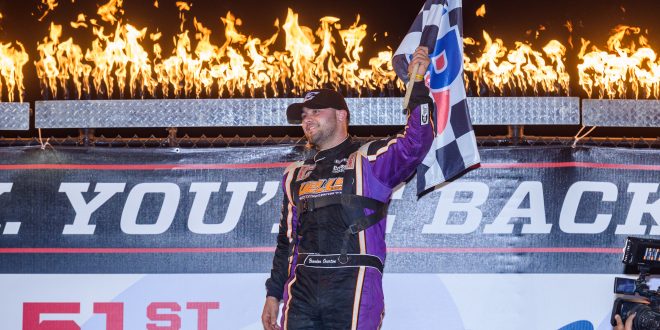 McCreadie bounces back to runner-up after DNF in Heat, McDowell third after 13 laps led

After sweeping both Dirt Late Model Dreams in June, Brandon Overton could only imagine coming back to Eldora Speedway in September and making history again by winning a World 100.

But there he stood Thursday night, atop the Victory Lane stage – $54,000 check in-hand, trophy, and elated family and crew by his side. His name, now forever scribed in the record books alongside each of the 30 other Late Model legends to win dirt track racing’s most prestigious event.

With tears in his eyes as he emerged from his Longhorn Chassis by Wells Motorsports #76, his dream was now reality once again as a first-time World 100 winner.

“Honestly, there aren’t enough words to say it. I don’t know how to express it, and what it means to me,” Overton said.

The 30-year-old from Evans, GA, started third on the grid and took his time getting to the head of the field, lurking behind front-row starters Ricky Thornton Jr. and Kyle Strickler in the opening laps. Overton didn’t make his first move for the lead until Lap 24, when he got a run at the exit of Turn 2 on Thornton and sealed the pass out of Turn 4.

Overton led the longest green-flag stretch of the race over the next 34 laps before a caution was thrown, putting 2005 winner Dale McDowell right on his rear bumper. McDowell found momentum on the top on the restart and sailed around Overton for the lead.

“I probably should’ve chose the top, but I restarted with my buddies,” Overton said. “I race with Shane and Dale, and we always hang out – I didn’t want to slide up and get into them.”

It was only nine laps later before one of the tightest battles of the race sparked up between the two and Jonathan Davenport, who came all the way from his 17th starting spot. Davenport rode third within a single car-length of the two leaders as they approached slower traffic, where Overton was forced to hit the top side to get around traffic. This left room for McDowell underneath, and he took the lead on Lap 59.

Overton soon devised a plan to get back by the #17M.

“When I moved up to the middle, I could feel it already starting to clean up, so I said, ‘alright, I’m just going to let him run, run, run, and then maybe if I sit back here and ride, when I catch him, I’ll have enough tire to make a move,’” Overton said.

McDowell held the lead for the next 13 laps until Overton got a great run off Turns 1-2, diamonding-off the corner and driving back by for the lead into Turn 3.

“I knew I had a lead – my brother was giving me signals back there,” McDowell said. “I caught that traffic so fast, and when I did, it just upset the car so much. I tried to move around, but it’s just so hard to lead. At that point, Brandon knew where to be because he knew not to do what I did.”

Meanwhile, a 19th-starting Tim McCreadie had made his way up into the podium and was hot on the trail of McDowell. He made the pass for second on Lap 78 after McDowell had some trouble in slower traffic.

“I ran in behind a lapped car and he came across, nothing intentional, but he came across and took the air off. When he did, the nose just kinda picked up,” McDowell said.

McCreadie then made a bee-line for Overton, now out front by almost three seconds with under 15 laps remaining. He was able to cut the gap down to under a second before taking the white flag, but came up short.

While he used the very bottom of the half-mile oval to drive to the win on Wednesday night, McCreadie said was not able to get his Paylor Motorsports Longhorn Chassis #39 to wheel around the same way, which cost him in the end.

“It was a little harder,” McCreadie said. “I couldn’t just drive by guys tonight like last night, so I just fought every lap, that’s all you can do when you start that far back. You can’t just crab and put around.”

McCreadie was forced to start all the way back in Row #10 after going up in smoke during his Heat Race and taking a provisional. This deep starting spot is what he said contributed to him coming up one spot short at the checkers.

“I need to be better and make this thing bulletproof, where we won’t have an issue where we start [19th]. We can get to the front and race with these guys early. That’s all you can do,” McCreadie said.

McDowell rounded out the podium, extending his World 100 start streak to a whopping 13 consecutive. Hudson O’Neal mixed it up inside the top-five for some time but fell back to fourth, while Davenport completed the top-five.