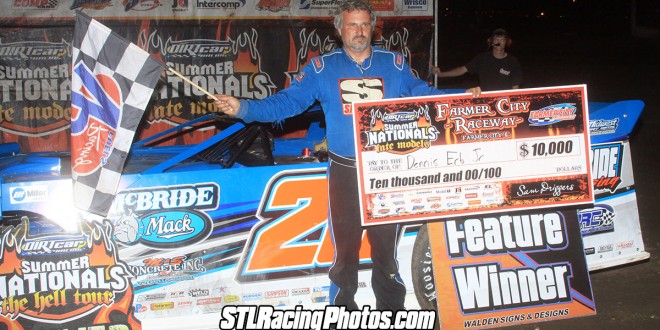 It took Erb, of Carpentersville, Ill., only 22 laps to push forward from his fifth-starting position and put pressure on Feger, who started from the pole. After stalking Feger for another 10 laps he finally slid to the lead and held on for the $10,000 payday at the quarter-mile dirt oval.

“It was a good race,” said Erb, a three-time DIRTcar Summer Nationals champion. “I had to start off a little slow, and I think once our tires came in, it got a little bit better there. We were able to get up there and follow him for a few laps there, see what he was doing, and knew that we could make a move, and it all worked out.”

Feger held on to finish second with Brandon Sheppard, Billy Moyer Jr. and Mason Zeigler rounding out the top five. Championship leader Bobby Pierce finished sixth, putting him in position to clinch the championship on Saturday night as the season wraps up at Oakshade Raceway in Wauseon, Ohio.