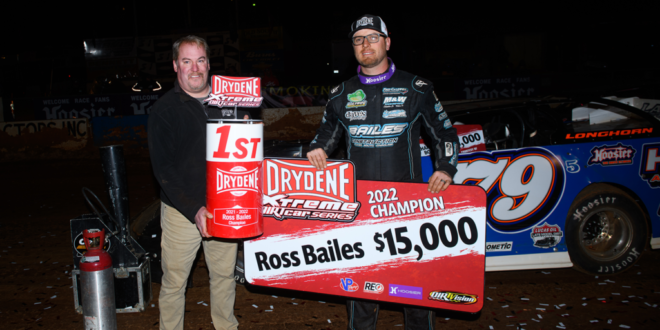 Bailes is presented with the championship trophy in Victory Lane. (Jacy Norgaard Photo)

Watkins crosses in 17th to finish runner-up in points, Ferguson drives Sanders No. 42 to 11th

Coming into the final race of the winter season, Ross Bailes faced an uphill battle unlike few he’s seen before in the seat of a Super Late Model. Staring into the face of defiance, not once did he flinch.

Seventeen points stood between he the 2021-22 Drydene Xtreme DIRTcar Series championship going into Saturday night’s Rock Gault Memorial finale at Cherokee Speedway. Starting fourth, Bailes drove the Billy Hicks Racing Longhorn No. 79 to a runner-up finish against a field of World of Outlaws CASE Construction Equipment Late Model Series drivers, besting Ben Watkins by 15 positions to overcome a 17-point gap between the two in the standings and clinch his first Xtreme Series title.

“It feels good, I’m just glad it’s over,” Bailes said with a sigh of relief.

While full-time Outlaw Max Blair celebrated in Victory Lane with the $20,000 Feature winner’s check, Bailes collected a $15,000 check of his own as Xtreme Series champion, plus a $1,000 bonus from Drydene Performance Products. He endured 60 laps of green-flag racing and kept his tires under him in a slight game of tire wear management while his competition stumbled, forced to come from out of the Last Chance races to make the show.

“Something I didn’t want to do was blow a tire running second,” Bailes, of Clover, SC, said. “There were times where I could have got up beside Max. If I wasn’t running for points, I might have done some things different or went a little harder.”

Bailes began the night with a bang, qualifying second in Group B and winning his Heat Race to claim a spot in the redraw. His championship rivals struggled – Watkins 11th-quick and Carson Ferguson 12th. This gave him a big advantage in track position for the Feature – an important element in longer-length main events.

Once Bailes got to second behind Blair, the two played a cat-and-mouse game in traffic. Though he was never able to make the pass, Bailes still had the pressure turned on full blast.

“We came here to win the race,” Bailes said. “I’m not gonna say we we’re stressing about it, but it was obviously in the back of our minds. Just like at Lavonia [in February], when Ben took the lead, I felt like there was a top there, but I didn’t want to go and try it because I didn’t want to lose more spots and points.”

Further back in the pack, Watkins was holding onto the 17th-18th spots, forcefully trying to muster the momentum needed to start gaining spots in the field.

“Especially around here, the competition’s just so tough,” Watkins, of Lancaster, SC, said. “We got behind a little bit early and it was just so hard to recover.”

Though he did not recover in the running order, he was able to hold on for a runner-up finish in the Xtreme Series standings – one worth $8,000.

“We’re still going to hold our heads up and be happy,” Watkins said. “We came into this thing pretty optimistic in going for the championship. It was nice to have a good run at it.”

Watkins and the Sandwood Racing/Wesley Page team put in a great deal of work in their pursuit for the Series title, shining especially in their efforts to repair the broken rear-end components that dropped them out of the Feature on Friday.

“It definitely makes us feel good,” Watkins said. “Last year when we teamed-up with Wesley and got something going, everything was fresh. I felt like coming into the start of this season, we had one good year behind us. Everything’s continuing to gel.”

Ferguson also suffered mechanical failure Friday night, breaking an oil pump while leading a Last Chance Showdown. Doug Sanders, veteran driver from McAndenville, NC, loaned Ferguson his car to finish out the weekend, which he drove from 24th-to-11th in Saturday night’s Feature to clinch third-place in the points championship.

“We had a lot of luck at the beginning of the season; definitely didn’t think we’d be in any kind of points chase with this deal,” Ferguson said. “We just ran it to get some seat time through the winter before the regular season started.

“After a few races, we found ourselves [tied for the lead] in the points after the first night at Lavonia, and that’s when the bad luck started.”

His near-top-10 Saturday night did break a stretch of two DNFs, which started with an untimely wreck at Lavonia Speedway in February and continued Friday night at Cherokee. But as a Super Late Model rookie driving for national championship-winning car owners, third-place is a great foundation on which he’ll continue to build his name in the Super ranks.

“I’ve got a lot better than other people starting out,” Ferguson said. “I’ve got a lot of connections that other people don’t when they first start, so a big thanks to Donald and Gena Bradsher and Wesley Page for putting me where I need to be, and now it’s up to me.”