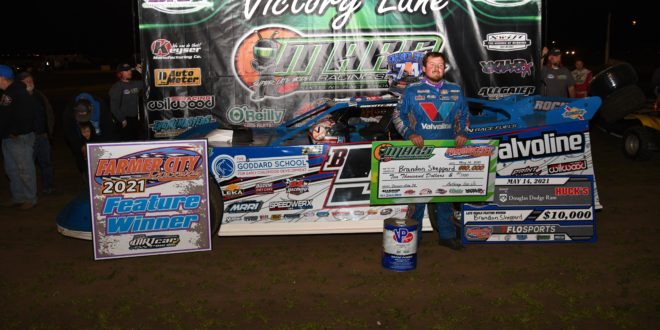 Back in the B5, Sheppard continues his streak of MARS wins from 2020, now has three in last three starts

Back in the family-owned B5 Rocket Chassis, back in front of the fans that know him best, and back in Victory Lane. Brandon Sheppard is the newest Farmer City 74 winner.

Sheppard, of New Berlin, IL, put on a clinic Friday night at Farmer City Raceway, leading all 74 laps of the track’s marquee event and cashing in for $10,000 in his first MARS Racing Series start of the season.

“It means a lot to me,” Sheppard said. “Anytime I can race around home and race the B5, I’ve got a big support system and a lot of people that like seeing this thing go fast.”

With only one night on the car so far this year, B-Shepp & Co. certainly made it hard to tell. An overall fast time in Qualifying by almost two tenths over second-fast Tanner English, a Heat Race win and the pole position drawn for the Feature. The stars were just all aligned in his favor, and he certainly made his presence felt.

At the drop of the green, Sheppard jetted out to a comfortable lead and set the pace early. A quick caution on Lap 13 restacked the field and opened up the door for a hungry Bobby Pierce behind him to jump into the picture.

Pierce, of Oakwood, IL, got a run to a second-running Tanner English’s outside on the restart and made it count, swiping the position away as he set sights on Sheppard’s rear bumper.

“It was good getting my Tanner there for second. I probably had nothing for Brandon; maybe if that top side was there in [Turns] 3 and 4,” Pierce said.

But as the laps clicked off, Pierce’s preferred lane on the top never came in and Sheppard was continuing to pull away in traffic.

At the height of his lead before a final caution was displayed on Lap 61, Sheppard was over five seconds ahead. But a great launch on the restart gave Sheppard the boost he needed to carry it all the way back to the finish line and win his first career Farmer City 74 trophy.

Pierce entertained the idea of going for the win had Sheppard slipped-up, but the opportunity never presented itself.

“If he would’ve went in there and missed the corner, I would’ve dove in there. But it’s Sheppard – he ain’t gonna do that,” Pierce said.

While he’s normally found tearing up the country on the road with the World of Outlaws Morton Buildings Late Model Series, racing for Rocket Chassis founder/owner Mark Richards, Sheppard enjoys each time he gets to come home and race his own equipment, maintained by his family team.

“Uncle Ed [Bauman] and Chuck Oberreiter, everybody that works on this B5 car, they take great care of this thing while I’m on the road,” Sheppard said. “It allows me to come back and just fine tune on the setups and make sure my tires are all done the way I want them… it just makes for a good deal.”

Most weekly DIRTcar Late Model races at FCR are 25 Laps in length. Friday was a whole different ball game in the 74-lap main event, which prompted the teams to make keen decisions on tire selection and save them from excess wear in the long-run.

“That was probably my main concern – me scrubbing that thing off and blowing the right-front out, honestly,” Sheppard said. “The right-rear tire was hard enough, but the right-front and left-rear wasn’t.”

The MARS Racing Series stars head just 45 minutes north to Fairbury Speedway on Saturday, May 15, to compete for a $15,000 top prize in the Spring Showcase. Hot Laps are scheduled for 5:50pm.