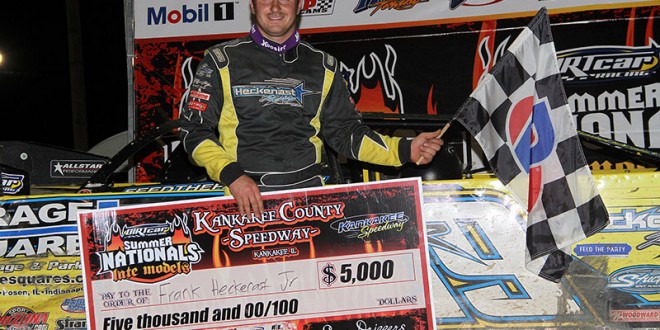 KANKAKEE, Ill. – June 11, 2015 – He might be only 26, but reigning World of Outlaws Late Model Series rookie of the year Frank Heckenast Jr. has turned many laps through the years in his quest to earn a DIRTcar Summer Nationals victory. Finally, on Thursday night at Kankakee County Speedway, he reached his goal.

Heckenast, a touring driver on the World of Outlaws Late Model Series tour from Orland Park, Ill., inherited the lead on lap 33 when Kevin Weaver’s motor expired. Weaver, the 2000 Summer Nationals champion, was closing in on his first series victory since 2013 when his misfortune struck. Heckenast, who started fourth, took advantage by leading the final seven laps and holding off his cousin, Mike Spatola, for the $5,000 win, Heckenast’s first on the Summer Nationals tour.

“It’s just so great to finally get this first one,” said Heckenast, who in February earned his first WoO Late Model victory, too. “I’ve been trying really hard to win one of these.”

After Heckenast and Spatola, Scott Schmitt, Bobby Pierce and Tanner English rounded out the top five.

There were 29 cars entered in the event. The DIRTcar Summer Nationals tour rolls north to Cedar Lake Speedway in New Richmond, Wis., for Friday and Saturday before heading Sunday to Wilmot (Wis.) Speedway.