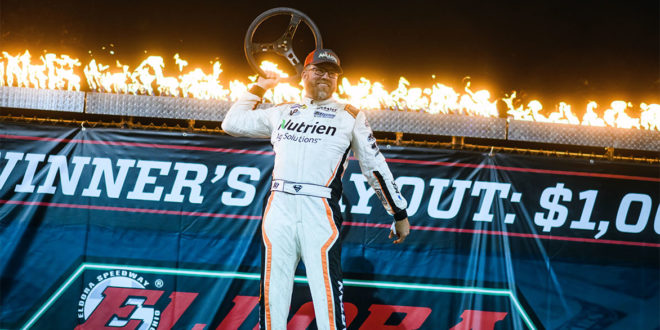 While drivers walked the victory stage at Eldora Speedway, each greeted with an eruption of cheers during their introduction, Jonathan Davenport sat quietly, out of sight, against the wall. A moment to catch his breath.

In minutes, he’d be competing to win $1,002,022 – the richest payout in dirt Late Model history – at the DIRTcar-sanctioned Eldora Million Thursday night. And while dreams of riches danced in the heads of drivers taking the stage before him, not even a cent spun in Davenport’s mind. He just needed a second.

After a more than 12-hour day of racing already, he and the Lance Landers Motorsports team were caught in a race against the clock, thrashing to make major replacements and adjustments to their #49 machine before the Feature they’ve been dreaming about since it was announced last year.

“I was trying to relax for a minute because it was so hectic after our Heat Race,” Davenport said. “I had a really bad vibration. And we changed transmissions, we changed the driveshaft three times because we could never get the yokes to go into the transmission. The water housing on the intake was leaking and blowing water on the carburetor. Then, we was switching wheels, switching tires. We had a vibration, we didn’t know what it was. We was trying to change everything that we could. 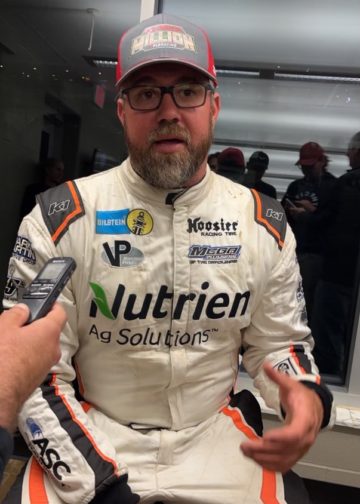 “Then, nothing was working right. The driveshaft wouldn’t fit into the new transmission. Finally, we ended up having to go back to the driveshaft we took out after the second new one we put in. We were to the last minute on the call. They were blowing the horn before we were even trying to put the last driveshaft, the old one back in. It was hectic, everybody running around, trying to do different things. And we didn’t even get to wipe the car down. Luckily, Tyler had the tires ready. Me and Vinny was trying to run around and make changes and communicate what we did and what we didn’t do. So, I was sitting over there trying to process my mind what we had done, just try to get a game plan for the race.”

The Blairsville, GA driver then lived up to his “Superman” nickname. He led the majority of the 101-lap race, survived multiple cautions, a couple licks against the wall and fended off attacks from multi-time national dirt Late Model champion Tim McCreadie to become the second driver in history to win the Eldora Million.

“Shit; I mean, how do you describe that?” Davenport said.

He’s picked up multiple Crown Jewel victories and championships, paying out more than $100,000, throughout his nearly 20-year career at the national level but even those combined won’t match what the million dollar win will mean to his life professionally and personally.

“The best year I ever had, the best year (multi-time Crown Jewel winner Brandon) Overton has ever had, the best year (four-time World of Outlaws CASE Construction Equipment Late Models champion Brandon) Sheppard has ever had don’t compete with this one night,” Davenport said. “So, um, I don’t know. It hasn’t sunk in yet. I, obviously, feel like I’ve been pretty good with my money. I remember driving an old Chevrolet pickup truck and sleeping on my buddies couch and I had a basket full of clothes when I moved to North Carolina. Me and (my wife) Rachel, when we met, sometimes we’d go out to eat, sometimes we’d be eating out of a change bucket. We went to the restaurant for not what we wanted, what we could afford. Now, hell, we’ll be eating wagyu beef.”

Will this win help replace all that? With honesty, he said he doesn’t know. But it’ll help.

Until his percentage of the money enters his bank account, he wasn’t letting the gravity of it overwhelm him. What’s he buying first? Didn’t know. What’s his overall plans with it? Time will tell. Probably keep some set aside for his son. Maybe make some smart investments. In general, like any race car driver, he was just happy to win.

“It’ll just be a cushion now,” he said. “It’ll make me feel relaxed. I ain’t going to be stupid and spend it all tomorrow. It’s hard to settle in. Definitely life changing.”

But not enough to stop him from still being Late Model fans’ favorite “Superman.”

After the hectic rush of Victory Lane interviews, pictures and a media center bullpen, Davenport sat quietly, out of sight, on a stool in the corner. A moment to catch his breath.

While dreams of riches danced in the heads of media members and fans of what they would do with a million dollars, not even a cent spun in Davenport’s mind. He just needed a second. Then, after a more than 14-hour day (now 2:30 a.m.) he gave more time, signing autographs and meeting with fans.

Davenport will try to add to his list of Crown Jewel victories this weekend with the Eldora Dream Twin 25 Qualifiers Friday night and the $128,000-to-win 28th Dirt Late Model Eldora Dream Saturday night.