CLICK HERE FOR MORE PHOTOS FROM THE UMP DIRTCAR BANQUET!

Feger, 31, of Bloomington, Ill., was saluted for his spectacular 2009 season, which saw him win his first UMP DIRTcar Super Late Model national championship – ending the two-year reign of Carpentersvile, Ill.’s Dennis Erb Jr. – lead the circuit with 23 feature wins and capture the UMP DIRTcar-sanctioned Monster Midwest Series title. The homegrown talent’s success earned him a total of $32,700 in points-fund checks during the gala evening.

Deer Creek, Ill.’s Cook, meanwhile, celebrated his first career UMP DIRTcar open-wheel Modified national title. The championship crowning was an emotional moment for the 33-year-old driver, who came back strong after falling short in the 2008 national points race while receiving treatment for a cancerous tumor that was found in his nasal package.

Over 750 attendees from more than a dozen states and Canada filled the ballroom to watch UMP DIRT Racing officials distribute over $400,000 to the organization’s 2009 champions and top performers.

An approachable racer known for his outgoing personality, Feger surprised no one when he accepted his championship laurels with a heartfelt, banquet-ending speech that stretched for more than 20 minutes. He spent much of his time behind the podium thanking the people who made his championship season possible, including his crew – led by his younger brother Austin, who earlier in the night was named the 2009 UMP DIRTcar Super Late Model Mechanic of the Year by vote of the organization’s membership – mother, grandmother, chassis builder Bob Pierce, engine builder Matt Rhyne and long list of sponsors.

Feger had especially kind words for Pierce, the legendary racer whose chassis Feger has used for the past two-and-half years.

“It’s such an honor to race with my childhood hero and help make his business succeed,” Feger said of Pierce. “You can’t imagine how much that means to me.”

After posing for photos with his close-knit team, Feger reflected on his career campaign.

“Earlier today I did a radio show at the Speed Expo (at the nearby Illinois State Fairgrounds) with Larry Lembeck and he kind of put (the national title) in perspective for me,” said Feger, who won the championship one year after being named UMP DIRTcar’s Most Improved Driver. “He started naming off some of the guys who have won this deal and the history behind it, and that really made it sink in for me. To be able to be listed with a group of guys like Gary Webb, Erb, (Randy) Korte, (Rodney) Melvin and a lot of others – that’s pretty impressive to me.

“Just to think that someday down the road somebody is gonna look back and see my name on this list (of UMP DIRTcar champions) – I hope they can have the same respect for me that I have for the guys who have won it.”

Feger’s points-fund earnings were topped by the $20,000 he received for the national title. He picked up another $5,000 for winning Don and Bonnie Hammer’s Monster Midwest Series, plus $5,000 for finishing fourth in the UMP DIRTcar Summer Nationals points standings; $2,000 for placing second in the Central Region points battle; and $700 for fourth place in the Northern Allstars Late Model Series points standings. Feger also received two sets of Dyer’s Top Rods for his national and Monster Midwest Series titles.

The only driver who left the banquet with more points-fund cash than Feger was Erb, who collected a total of $38,100 despite failing to three-peat as national champion. He still earned $25,000 for winning his third consecutive UMP DIRTcar Summer Nationals title; $10,000 for finishing second in the national points standings; $2,000 for a runner-up placing on the Northern Allstars Late Model Series; $700 for fourth place on the Monster Midwest Series; and $400 for sixth place in the Central Region.

A feel-good vibe ran through the banquet attendees when Cook walked across the stage to receive his 2009 UMP DIRTcar Modified national championship hardware. His impeccable 24-victory season completed the title march he had begun in 2008 before his health scare sidetracked his hopes.

Cook finished third in the 2008 UMP DIRTcar national Modified points standings despite missing some mid-season racing time while undergoing radiation and chemotherapy treatments for an inoperable cancerous tumor that doctors found in July near his nasal passage. With doctors determining before New Year’s Day 2009 that Cook’s cancer had gone into remission and subsequent cancer scans finding that the dead tissue was continuing to deteriorate, Cook was able to race full-strength for the entire ’09 campaign.

“It was pretty emotional,” Cook said of his moment in the UMP DIRTcar banquet spotlight. “Winning this championship is what we set out to do last year, but we couldn’t do it because of unfortunate circumstances. Fortunately we were able to come back strong (in 2009) and meet our goal, which makes us feel great.”

Cook reached the UMP DIRTcar promised land driving a Pierce Chassis Modified for car owners Jim and Kim Scott. With his mission accomplished, the father of two young children plans to put his focus on chasing big-race wins in 2010.

Cook’s points-fund earnings totaled $22,100, including $2,000 for winning the Northwest Region title and $100 for placing 10th in the Midwest Region.

Cook’s crew chief, Bill Klingbiel, was also honored during the night as the 2009 UMP DIRTcar Modified Mechanic of the Year by vote of the organization’s membership.

The night’s third-largest championship booty was claimed by Bobby Dauderman of Alhambra, Ill., who pocketed $10,000 for unseating Tait Davenport of Paducah, Ky., as the UMP DIRTcar Pro Late Model national titlist. He padded his earnings with an additional $1,000 check for winning the North Region points standings during the second season for UMP DIRTcar’s fledgling crate-engine Late Model class.

“It was definitely a nerve-wracking points race,” the 22-year-old Dauderman said of a dramatic battle with Davenport. “We didn’t win it until the last night. It was pretty exciting.”

Russell Eilers, 19, of Highland, Ill., celebrated his first career UMP DIRTcar Sportsman national championship after roaring to 17 feature wins in 2009. An up-and-comer whose older brother drives a Modified and younger brother runs in the Sportsman division, he earned $3,500, including $500 for capturing the West Region points.

Rick Thomas of Dwight, Ill., celebrated the biggest championship honor of his three-decade-long racing career, enjoying the spotlight as the UMP DIRTcar Stock Car national titlist. At 52 the oldest national champion in 2009, Thomas earned $3,500, including $500 for winning the West Region points race.

Bob Zbinden, 20, of Alhambra, Ill. (Sport Compact) and Bill May, 47, of Muskegon, Mich. (Factory Stocks) were honored as the national champions of UMP DIRTcar’s entry-level classes, which debuted in 2007. Both drivers earned $1,500, including $500 checks for capturing regional titles.

Following a 2009 campaign that saw over 10,000 drivers earn points, all eight 2009 national champions wore their crowns for the first time.

What’s more, three of the national champs graduated from the same high school. Dauderman (Class of 2006) as well as Eilers and Zbinden (Class of 2008) attended Highland (Ill.) High School.

Regional champions were named in all eight divisions.

* Limited Modified regional crowns (worth $500) were claimed by Boone (East) and John Paul Talkington of Denham Spring, La. (West), who was not in attendance.

A number of special awards determined by a vote of the UMP DIRTcar Racing membership were handed out:

* Brownstown (Ind.) Speedway was announced as the UMP DIRTcar Racing Track of the Year. Promoter Tim Keithley accepted the award.

* Tom Sprague of Winston Speedway in Rothbury, Mich., was feted as the 2009 UMP DIRTcar Racing Promoter of the Year.

The affair began for the second consecutive year with an awards ceremony for the top-seven drivers in the new Kid Modz division, a four-cylinder version of a UMP DIRTcar Modified that car builder Bob Pierce launched to bring youngsters into the sport. Heidi Goodman, 12, of Chillicothe, Ill., received a check for $2,000 as the division’s 2009 champion.

The 2010 UMP DIRTcar Racing season begins with a five-day meet for the open-wheel Modifieds running from Jan. 26-30 at East Bay Raceway Park in Gibsonton, Fla. Both the Modifieds and Super Late Models will then be part of the 39th annual DIRTcar Nationals by UNOH at Volusia Speedway Park in Barberville, Fla., with the Modifieds running nightly from Feb. 2-9 and the Super Late Models contesting sanctioned events on Feb. 8, 9, 10 and 12. 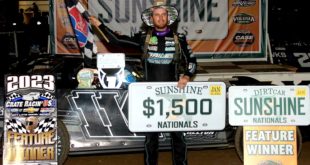