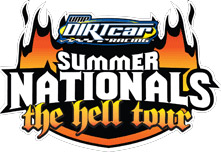 ATTICA, OH – July 16 – The pressure was clearly building around Jason Feger as the DIRTcar Summer Nationals Hell Tour entered its championship weekend Friday night at Attica Raceway Park. Through 27 events in 30 days, Feger was atop the overall standings and seeking his first series crown.

After a grueling schedule throughout the Midwest, Feger decided enough was enough and took care of business Friday night, holding off Jeep Van Wormer over 40 laps at the 1/3-mile high-banked oval to earn his second Hell Tour victory. In doing so, Feger also clinched his first DIRTcar Summer Nationals Hell Tour championship, meaning Saturday at Oakshade Raceway will feature an incredible victory celebration as he tries to add one more win in the series finale after unseating three-time Hell Tour champion Dennis Erb Jr.

“You feel every bump, every vibration, and all the noise with so much on the line,” said Feger, 32, the 2009 DIRTcar Late Model national champion from Bloomington, Ill. “I’m just glad the pressure is off and we can get back to having fun.

“It means a lot to finally beat Dennis. He’s been so good on this deal for so long. That guy is just so good and is always consistent. He and I race together a lot and we’re both fierce competitors. It also feels really good being the first Bob Pierce race car to win a Summer Nationals. It’s just a pretty awesome feeling right now.” 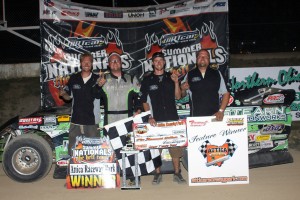 It wasn’t an easy victory as Feger was forced to withstand a deluge of challenges from Van Wormer. Surviving the grinding day-after-day schedule has its rewards. He collected $5,000 for winning at Attica, plus another $25,000 for the DIRTcar Summer Nationals crown.

“It was a long 40 laps, especially until the last green flag stretch,” Feger said. “I knew Jeep had a softer tire on the left than I did and he was firing really well down on the bottom on the restarts. I just needed a few laps to get going.”
Van Wormer, of Pinconning, Mich., settled for second ahead of Matt Miller of Waterville, Ohio.

Erb, of Carpentersville, Ill., was trying to win a fourth consecutive Summer Nationals title. He rallied from 15th to finish fourth ahead of travel mate Jason McBride of Carbondale, Ill.

The DIRTcar Summer Nationals Hell Tour wraps up Saturday with the annual Birthday Race at Oakshade Raceway in Wauseon, Ohio. In total the Hell Tour has traveled more than 4,900 miles in the course of 30 nights. The trip from Attica Raceway Park to Oakshade Raceway in Wauseon, Ohio, will have drivers traveling over 100 miles west to the track, which will serve as 28th race since the 2010 tour started on June 16.