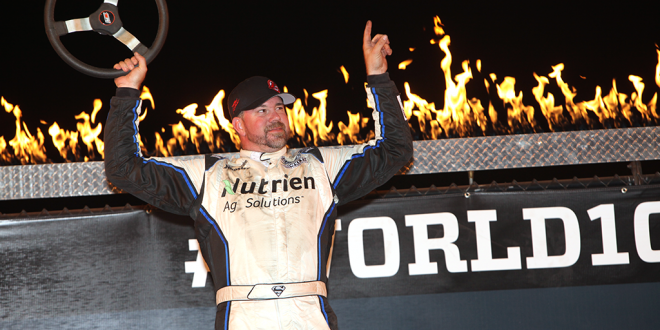 Eldora Speedway’s annual World 100 has often been thought of as Dirt Late Model Racing’s Super Bowl or Daytona 500. Winning it just once puts a driver’s name beside the greatest the sport has ever had to offer, and one of the tallest trophies available into their trophy cabinet. Jonathan Davenport is now the proud owner of three of those globe trophies, as he drove his Lance Landers-owned #49 to victory on Saturday night in front of a capacity crowd to claim his third World 100 title in the last five years.

In his eye-catching “Brewster Baker” throwback #49 graphics scheme, Davenport was strong in each race each day this weekend, collecting a preliminary Feature victory on Friday night that set him up for a second-place run in his Heat race on Saturday. That finish gave him a seventh-place starting spot on the grid for the Feature, where he wasted little time on his charge to the front, cracking the podium inside of the first 25 laps.

But as then-leader Bobby Pierce approached lap 30, Davenport noticed something in his car starting to fade.

Much like Pierce himself experienced in the Prairie Dirt Classic at Fairbury back in July, Davenport’s power steering system had malfunctioned mid-race. Over the course of the next 70 laps, that mechanical failure began to take its physical toll on the Blairsville, Georgia-native. In fact, by the time he had brought his Nutrien Ag Solutions Longhorn Chassis up to the Victory Lane stage, Davenport said he couldn’t even feel his arms.

“It was definitely tough. It might have made me better to where I didn’t have to move the wheel much, but I was turning left into the corner with the brake pedal, just trying to hold the wheel straight and exiting the corner using just my foot to accelerate,” he said.

From lap 30 onward, Davenport continued to move forward without the aid of power steering, catching and passing polesitter John Blankenship for second on lap 27. A restart on lap 31 marked the beginning of Davenport’s battle with Pierce over the next 40 laps, buying time and track position for Ricky Weiss and his efforts to catch the leaders.

As Weiss closed in, the battle between the “Smooth Operator” and “Superman” began to heat up, Pierce on the high side and Davenport chomping at the bit down low. The two had battled this way in lapped traffic 20 laps earlier, but Davenport was only able to get a dive deep enough into the corner to clear the #32 on one occasion – lap 48, where he just barely nosed Pierce at the line on lap 48. Come lap 62, Davenport got enough momentum on the low side to nip Pierce at the line again before Pierce took it back one circuit later.

The two sparred for a few more laps before encountering the wrath of “The Manitoba Missile,” as Weiss found something on the topside to make the move on Davenport for second. But that didn’t last long, as “JD” got a great run in the low groove on lap 67, going underneath Weiss and Pierce to take the lead back. This time, it was permanent.

“It was awesome racing between us,” Davenport said. “Ricky got up there racing with us in lapped traffic, and I just moved around and found a couple more lines – just got into a rhythm of what I needed to do to rive my racecar the way it was.”

Davenport turned on the jets and opened up an advantage of almost two full seconds over Weiss by the time a caution came out with 17 laps remaining for Pierce, who had slapped the turn one wall, ending his chances for glory.

Davenport opened up another 2.6-second advantage after the lap 84 restart before another caution waived, placing Weiss and 2007/2011 winner Jimmy Owens right on his rear bumper. His arms were giving out and he was feeling the pressure, but Davenport prevailed, hanging on to lead the final circuits and collect his third World 100 trophy under three different car owners.

“Ricky got a really good jump on that second restart. He jumped me just a little bit, and I didn’t spin the tires, but I was trying to be really patient. I pulled back by him just a little bit at the flag stand, had to slide him down here, I’m sure it was very close. But it’s the World 100, you’ve got to do what you can.”

His 2015 win came aboard the Kevin & Leeroy Rumley-owned Longhorn Chassis #6, the same year he became the third driver in Eldora Speedway history to win the Dirt Late Model Dream and World 100 in the same year. 2017 saw a red/white #49 pull into Eldora Victory Lane, owned by North Carolinian GR Smith. Now, JD’s current car owner Lance Landers is a World 100 Champion in 2019. Davenport joked that there’s a couple ways of viewing that statistic, but it does go to show the versatility of his veteran driving skills.

“Well, you can look at it from one side – I can’t hold a ride down,” Davenport chuckled. “Or the other side is, I’ve won it twice in a Longhorn Chassis, the other in a Rocket. Just about every car owner I’ve had, I could go back and drive for again. A car owner is a car owner, as long as they’re a good one and can give me the tools that I need to work with, I can do my job.”

It’s been a terrific season for JD already this year. Leading his full-time national tour in points, 15 Feature wins, and now another crown jewel to add to his collection. He said he’s still kicking himself a bit after a sour ending to his Dirt Late Model Dream run back in June, a race he said he could have won, but tonight he sings a song of redemption and places a cherry on top of his still-unfinished 2019 racing season sundae.

“We’ve put ourselves in position to win so many crown jewels this year,” Davenport said. “Either bad racing luck has happened to us or we’ve dolled ourselves out in the 100-lappers… I thought it was going to happen again whenever the power steering started acting up and went out.”

Owens also hung onto his runner-up spot from the lap 92 restart, battling with Weiss, Chris Madden and Stormy Scott in the final stages to bag a solid second-place in the World 100 finale. He played the final restart perfectly to get ahead of the field behind him and secure the second spot late, despite his satisfaction with a third-place finish before the restart.

“I was really worried about restarts the first time, but we took off in front of Madden, who’s had a great car all weekend,” Owens said. “I was happy with third and thought ‘man, we’re pretty good right here.’ But the longer we run, the further out those guys would get.”

Canadian Ricky Weiss wrapped up a podium finish in his very first World 100 start after running up front all weekend. His efforts to stay on the podium with the pressure behind him on the last restart were unmatched, as he made a costly mistake driving into turn one and washing up the track, giving up second to Owens. Madden and Scott got underneath the Turk Enterprises #7W and grabbed the position for two laps after, but the topside momentum propelled Weiss back around them both.

“It was a good race until that last restart, we just went for it,” Weiss said. “I mean, second or third… heck, I could’ve got a DNF with the way I drove it in there. But we also could’ve maybe won it, so it was worth it.” 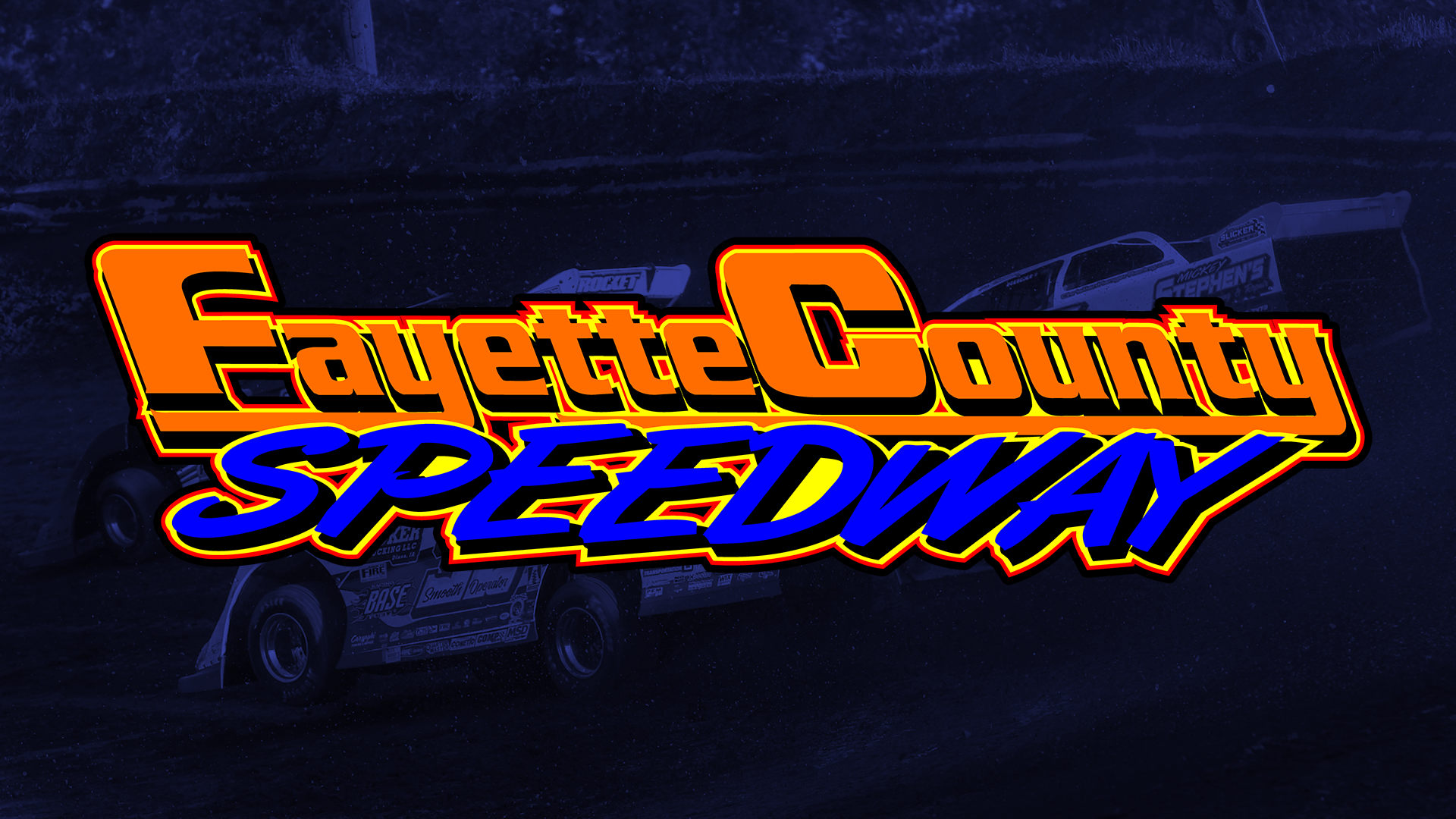