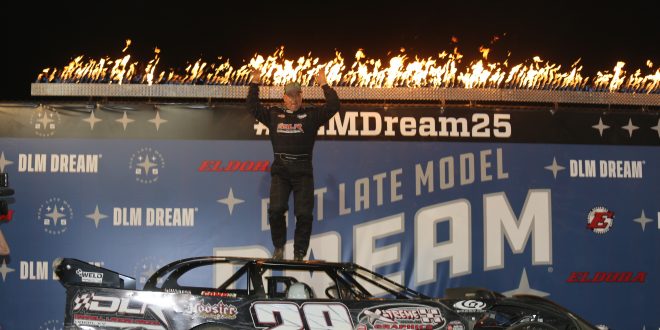 ROSSBURG, OH – June 6, 2019 – The 25th running of the Dirt Late Model Dream started out with everything the Dirt Late Model world was hoping for on a Thursday night – clear skies, warm weather and a record car-count not seen in 7 years. The only thing left on the list was some incredible racing from the industry’s best competitors. And boy, did they ever deliver on that.

92 of the best DIRTcar Late Model drivers in the world packed the pit area and put on a show the Eldora Speedway crowd would not soon forget, starting with Darrell Lanigan’s incredible last-lap pass for the win over Jonathan Davenport in Group A’s Feature. Fellow World of Outlaws Morton Buildings Late Model Series regular Ricky Weiss also put the moves on his competition, driving around World of Outlaws veteran Chris Madden and Thursday’s fast qualifier Jacob Hawkins to pick up his very first win at Eldora in the Group B Feature.

Group A Competition:
Lanigan came right out of the gate swinging, setting fast time in Group A and picking up a redraw spot from his second-place effort in Heat 1. Meanwhile, Davenport qualified 10th in the group, but muscled his way to a victory in Heat 2, setting him up for an outside-pole redraw.

From the drop of the green, every fan in attendance likely thought it was going to be another smooth-sailing cruise to victory for “Superman.” He hit a thick part of lapped traffic on lap 10, but expertly maneuvered through it to hold his lead over Chatham, IL’s Brian Shirley. But this advantage would fade quickly, as Lanigan put a strong move on Shirley going down the backstretch on lap 15. With 10 laps remaining, “J.D.” was now a sitting duck.

Without a doubt, Lanigan’s Club 29 car was the fastest machine on the racetrack in the final laps, as he closed the gap rapidly. With three laps left, there was almost no gap between he and Davenport, and that’s when Lanigan knew it was time to crack the whip and set up to make the move.

Two lapped cars sat in Davenport’s way – Brandon Overton on the low side, John Blankenship on the top. With no choice but to get off the bottom, Davenport moved to the middle-top in turns three and four to take away Lanigan’s line, coming to the white flag. Naturally, Lanigan turned it back underneath Davenport and drag-raced him down the front-stretch.

“Once we took the white, I saw a black car beside me and I didn’t know who it was,” Davenport said. “It sounded like he was in the gas pretty hard, so I figured it was somebody.”

Into turn one they raced, and with minimal contact, Lanigan drew a nose in front of Davenport. They drag-raced again down the backstretch, around Overton, and when Davenport slipped way up to the top in turn three, Lanigan saw just enough room to get by underneath and made the most of it. Davenport made a last-ditch effort to try and swipe the spot away on the bottom, but to no avail.

It was over. The “Bluegrass Bandit” had won the third Dirt Late Model Dream preliminary Feature of his career, and what a ride it was from his perspective.

“I got a good run off the bottom [of turn three] and got up beside him,” he said. “We rubbed a little bit getting into turn one, and then we went three-wide with the lapped car. I think Davenport was rubbing the wall [back into turn three], but we came out ahead, and it was fun.”

On the other side, Davenport knew he had let one slip away, but was in light spirits, as a second-place finish in a preliminary feature gave him a great start to his weekend in event points.

“I think [my night] went really well, up until the last 200 yards,” Davenport said with a chuckle.

In hindsight, Davenport said sticking to the low line may not have been the absolute best idea, but knows of how also refusing to move from the high side has cost him wins at the very same track in previous starts.

“I just didn’t move off of the bottom fast enough,” he said. “I was just concentrating on running around the bottom and should have moved up.”

“But I’ll just take those growing pains,” Davenport continued. “Keep them in the back of my head and remember to move around a bit more.”

Group B Competition:
The story of Ricky Weiss’ drive to victory in Thursday’s Group B Feature was not as dramatic as Lanigan’s, but just as exciting to watch.

Weiss laid down a lap of 16.041 in qualifying, only good enough for 15th in Group B. However, with the lineup procedure for the Heat races, Weiss started on the pole in Heat 4 and won, setting himself up for a fourth-place redraw effort. And did he ever make the most of it…

Right from the drop of the green, the Turk Enterprises, Sweet-Bloomquist chassis #7 was a rocket ship. He made the move underneath Chris Madden on a crossover move out of turn four to take the runner-up spot on lap 4 and wrestled the lead from Jacob Hawkins by lap 10.

From that point onward, it was smooth sailing for Weiss. Nobody was able to even come near the black-and-orange #7, as he led the final 16 laps to claim his very first Feature win at “The Big E.”

“From the second we pulled in, my crew unloaded the car, and we’ve all been pretty confident on that car and that program,” Weiss said. “This is one of our favorite tracks, and we knew, coming in, that we’d be something to contend with.”

As expected, Weiss and the crew had a lot of Scott Bloomquist’s teachings in the back of their heads on Thursday night, and were especially proud to pick up the victory for his brand.

“This was just an awesome race for the Bloomquist cars. It just goes to show how strong we really are,” Weiss said.

Meanwhile, Chris Madden got the bounce-back finish he needed on Thursday, fighting for the runner-up spot with Jacob Hawkins early and finally running off with the spot on lap 13. He held that spot and looked very strong the rest of the way – a much-needed boost of confidence after experiencing some mechanical misfortunes in previous weeks’ competition.

With Lanigan’s and Weiss’ victories on Thursday night, it marks the first time in event history, since the 2013 format change, that a single night’s preliminary Features were both won by full-time World of Outlaws drivers.

Day two of #DLMDream25 at Eldora Speedway gets underway on Friday, June 7, with the drivers meeting at 5 p.m. and hot laps at 6:30. Stream every lap in real-time on DirtonDirt.com, and keep it locked to DIRTcar Racing’s Twitter and Facebook pages for all the real-time, mobile updates!