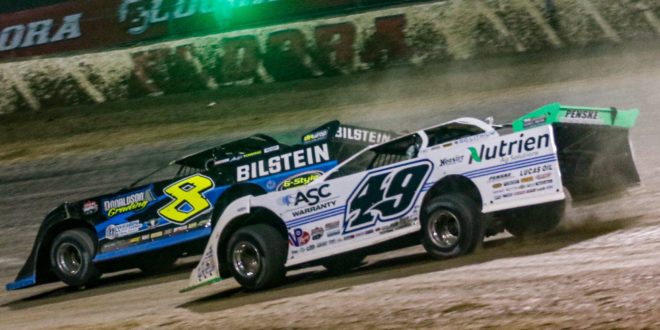 On a night where the top five saw comers and goers left and right in the 67-lap, $50,000-to-win feature, it was ultimately a tale of two men when the inaugural Intercontinental Classic concluded at Eldora Speedway.

For Kyle Strickler, it was arguably the most agonizing, excruciating loss of his career. The “High Side Tickler” controlled 65 of 67 laps; he led by 2.5-seconds with five to go; let’s be honest, he had the race won. However, it all changed when the white flag flew. Suffering a flat right rear, the Mooresville, N.C. native had his first-ever Crown Jewel win painfully stripped from his grasp on the final lap. Instead of a trip to Eldora’s victory stage, the 37-year old had to settle for the most bitter sixth-place result of his life.

“I promise you that was the longest lap of my life trying to hold on and win $50,000,” a dejected Strickler offered. “I am so heartbroken. They say you have to lose some before you win some, though. We’ll be back.”

For Jonathan Davenport, it was his latest chapter in an ever-expanding legacy that “Superman” is building at “The Big E.” Capitalizing in the right place at the right time, Davenport played his cards right and was ready to pounce when Strickler’s right rear went away. Leading only one lap of the 67-lapper, JD etched his name into the record books as the winner of the Intercontinental Classic, a spectator-only event held in place of the 50th World 100. Continuing his run as a modern-day Eldora legend, the Blairsville, Ga. native won his fourth September special at Eldora in the last six years with this $50,000 payday joining his World 100 titles in 2015, 2017 and 2019.

“I saw it going down on the backstretch and thought ‘oh sh*t, he’s got a flat,'” Davenport said of Strickler’s tire. “I hate that for Kyle and those guys, man that really sucks. Leading the whole and losing it on the last lap is pretty terrible. Maybe everything happens for a reason though.”

With the cards falling his way, Davenport was the fourth yet luckiest driver to chase Strickler on Saturday night. The likes of Chris Ferguson, Ricky Weiss and Dale McDowell all had their shot at sitting behind the Bilstein No. 8, but it was Davenport who was there when it counted most. Starting 8th, he slowly worked his way forward in the Lance Landers owned No. 49 machine. JD went to 7th on lap nine, 6th on lap 15, 5th on lap 18, 4th on lap 30, 3rd on lap 56, 2nd on lap 60, and 1st on lap 67 at the checkered flag.

For Strickler, his quest started from second as Chris Ferguson of Mount Holly, N.C. controlled the first circuit in his Team Zero Race Car No. 22. Striking with a turn one slider that featured some slight contact on lap two, Strickler ripped the top spot away and set sail on the field. Acing a handful of restarts, Strickler was untouchable until lap traffic held him up and Ricky Weiss gave him his biggest challenge of the night.

Weiss, in his Dryden Performance Products No. 7 Team Zero Race Car, was side-by-side with Strickler at the stripe and missed him by just .064 seconds on lap 49 of the 67-lapper. The Headingley, Man. native cleared Strickler and made the pass for the lead down the backstretch, but never officially led a lap as he faded off turn four and gave Stricker the point right back. He lasted six more laps before his night went up in smoke on lap 55, a heartbreaking end to a stellar weekend at the Rossburg, Ohio half-mile.

Dale McDowell of Chickamauga, Ga. was next in line to bid for the lead, but trouble soon struck his E-Z-GO No. 17M Team Zero Race Car and sent him falling through the field on the final restart with eight to go. From there, Strickler checked out and ran away to a 2.5-second advantage with four laps remaining. But when the white flag flew, one of the most infamous final half-mile rides in track history ensued.

“I saw them waving the white flag and I knew I had to get positioned to get across the corner and get by him,” Davenport said on adjusting to make the last-lap pass. Strickler, however, felt it going down the lap prior and all he could do was hope to limp the No. 8 home. “I wasn’t leaning on it until those last five laps, but then it must have cut something up there,” Strickler noted. “I felt it going down the lap before and knew I was in trouble.”

Also capitalizing on Strickler’s misfortune and moving up on the final lap was Tim McCreadie of Watertown, N.Y. in the No. 39 machine. Making it a Longhorn Chassis 1-2, the June Dirt Late Model Stream champion raced to second-from-ninth in Saturday’s 67-lapper. Rounding out the Intercontinental Classic podium at Eldora Speedway was the night’s hard charger, Shannon Babb of Moweaqua, Ill. with an 18th-to-third run in the Team Zero Race Car No. 18B.

Dennis Erb Jr. of Carpentersville, Ill. also offered a remarkable run through the field, driving his Rocket Chassis No. 28 from 17th-to-fourth. Concluding the top five was Chris Ferguson in fifth, who finished an impressive rally after falling from second-to-14th on a lap 30 restart when he hit the turn one wall.

Closing out the top ten on Saturday night was Kyle Strickler with a heartbreaking sixth-place finish, Scott Bloomquist with his best Eldora finish of the year in seventh-place, Chase Junghans with an eighth-place run, Chris Madden with a ninth-place effort, and Brandon Sheppard with a tenth-place result after pitting.

“We miss you,” Davenport said to the fans in an empty victory lane. “This place ain’t nothing without the fans. I didn’t even want to celebrate and cheer; it seems silly to stand up and jump on the roof without you guys here. I can’t wait to see this place packed again.”