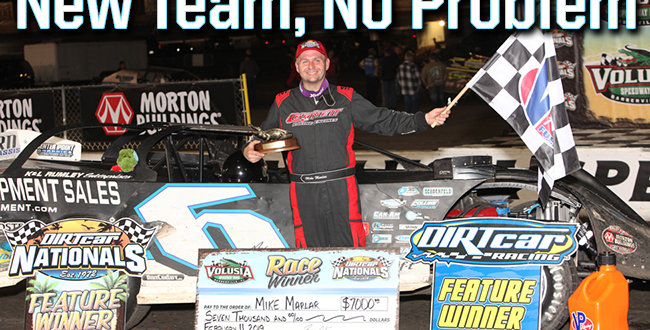 Marlar Battles Back on the Topside to Win Late Model Feature No. 1

BARBERVILLE, FL – Feb. 11, 2019 – How many drivers can say they won in their third night out with a team that hasn’t raced in two seasons? 2018 World of Outlaws Morton Buildings Late Model Series Champion Mike Marlar can now, as he, Darrell Lanigan, Josh Richards and Scott Bloomquist (18th to 3rd) put on an amazing display of passing and battling through 30 laps that saw Marlar come out on top for his first-ever victory at Volusia Speedway Park with his brand-new K&L Rumley Racing-owned ride.

“It’s cool to get to win in something that’s an iconic ride,” Marlar said. “It’s been a lot of fun getting to know these guys and already having some success. It’s been awesome.”

“The Winfield Warrior” started third on the grid and took the lead away from outside polesitter Chase Junghans on lap 6, and held it until just over 10 laps remaining, when Richards powered underneath to take the lead. Marlar would get Richards back, however, as he drilled the cushion with his right rear and stood on the throttle coming out of turn four to complete one of the most aggressive and fearless passes of the night. That proved to be the winning move, as Marlar would not relinquish the spot, giving him a nice $7,000 start to Late Model week at Volusia.

“Going down the back straight-away, I knew that he was pushing,” Marlar said “And when I saw him pushing, I knew I was going to have to back up his corner and turn his car, so I just said ‘here’s my chance.’ So I just blasted around the outside and tried to catch him when he was out of the gas, trying to get turned, and that gave me enough of a run. I just barely squeezed by and got back into the groove in front of him.”

Marlar joined Kevin and Leeroy Rumley’s team in late 2018 as the new driver of their iconic No. 6M, after Marlar’s former car owner Ronnie Delk announced his plans to step down from full-time racing at the conclusion of the 2018 World of Outlaws season, falling right in line with Marlar’s own plans to also scale back on his racing career. At the time, there was much speculation as to where Marlar would be racing in 2019 and how frequently. As it turns out, a part-time, pick-n-choose schedule aboard the black-and-blue No. 6M is a perfect match.

But the team didn’t exactly get this impressive of a start straight out of the hauler. Marlar made a very-welcomed appearance at the World of Outlaws Morton Buildings Late Model Series season opener at Screven Motor Speedway last Friday and Saturday night, but posted only a 25th-place finish after getting into a jingle with Ivedent Lloyd Jr. early on. Saturday wasn’t much better – a 22nd-place effort, three laps down. But what a turnaround he and the Rumley Racing team has made in just a matter of hours, as they undoubtedly had the fastest car on the racetrack Monday night.

“It’s totally different stuff on the car than in the last two days,” Marlar said. “It took me a few laps in the feature just to learn how to drive it. Once I figured out what I could do with it, I was able to go forward. It was an awesome win, that was so much fun.”

There seems to be a semi-common theme to Speedweeks this year – drivers debuting in their new rides and having immense success right away. From Tyler Erb’s three-for-four stretch at Golden Isles Speedway and East Bay Raceway Park last week, to Chris Madden’s runner-up and top-10 finishes at Screven last week, the Late Model world is alive with the sweet smell of newfound success. And Marlar would agree.

“I think what you’re seeing is that there’s a lot of smart people in this sport and a lot of people that know the chemistry within these different teams and knowing what they need to win,” Marlar said. “With that being said, I think a lot of these guys made changes that helped the team they left, and then the guy that filled in there did better in some situations.”

Another very impressive drive to a podium spot on Monday night was actually the winner of Last Chance Qualifier 2, Scott Bloomquist. “Black Sunshine” did not have the heat race he was looking for but was able to bounce back with a very convincing win in his LCS. Ironically, his protégé, 2019 World of Outlaws Rookie of the Year contender Ricky Weiss, won the other LCS, putting both Sweet-Bloomquist chassis into the show.

From the 18th starting spot, Bloomquist began the charge on lap one of the Feature, passing five cars on the first lap and cracking the top ten next time around. Bloomquist kept climbing from there, reaching P5 inside of 15 laps and making the move underneath Richards for third with five to go. That’s where he would stay, a very telling effort by the race’s Hard Charger Award winner and former World of Outlaws Morton Buildings Late Model Series champion.

“It was definitely capable of winning the race this evening,” Bloomquist said. “I didn’t want to see that caution [with 10 laps to go]. The caution comes out, the tires don’t act the same. I got stuck behind Junghans there and I should have just went outside of him. The next time, on that last caution, I did go outside of him and I got by him and some others and the car was really rolling good.”

“Bloomer” is certainly no stranger to Victory Lane at Volusia, having won 12 features at the famed half-mile since his first in 1994. And he said he knows what he needs to do to make it 13 this week.

“I am pretty confident that we can just take left with tonight,” Bloomquist said. “I’ve already discussed some things with Cody [Mallory] and told him at least two or three things that I know we’ll do different for tomorrow, and then we’ll sleep on it and see what comes from above.”

Around the lap 32-mark, the battle for the runner-up spot was on between Darrell Lanigan and Josh Richards, the former and current Clint Bowyer Racing pilots. The gloves appeared to have come off right on the track, as multiple instances of contact between the two were seen throughout lap 32. When it was all said and done, Lanigan came away with the second-place spot, and Richards settled for fourth behind Bloomquist.

When asked for comments on the situation, Lanigan replied “We had a really good piece. Like I said [in Victory Lane], if we wouldn’t have gotten tangled up there with Josh, he just doesn’t want to race you clean… I think we had a chance to win it if we wouldn’t have got tangled up with him, but we’ve got a long week.” Lanigan’s far more explicit quotes in Victory Lane directly after the race can be viewed below.

“We were just racing,” Richards said in an interview after the race. “I don’t know, I was underneath him and I did drive in there a little bit, and then I stopped to keep from sliding into him. Then, instead of him going around the outside, he tried to cross back over and got hooked. I didn’t see anything wrong.”

Find out how this and all the other battles unfold on night #8 of the 48th Annual DIRTcar Nationals at Volusia Speedway Park, beginning tomorrow, Feb. 12 with round two of the DIRTcar Late Models on “The World’s Fastest Half Mile.” Get your tickets now, or watch live on DIRTVision!