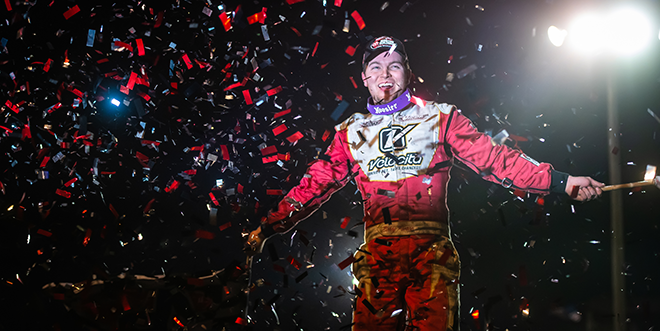 After a six-month-long regular season, the DIRTcar national and regional champions have been decided, and it’s time to deliver the hardware.

Each champion and special award winner will be honored at the 36th annual DIRTcar Racing awards banquet on Saturday, Jan. 8 at the Springfield Crowne Plaza.

Late Model and UMP Modified drivers finishing inside the top-50 of national points plus any driver in the top-20 of all other divisions are eligible to receive their points fund check at the banquet. The top-10 of each division’s region are also eligible for recognition during the ceremony.

Congratulations to each of the 2021 DIRTcar national points champions.

Love him or hate him, there’s no denying his prowess behind the wheel this season. Twenty DIRTcar Feature wins in 57 starts put him atop both categories in the national standings, tying runner-up Rusty Schlenk for wins and beating him by 90 points – the smallest margin of victory in each of his four titles, three of which he also defeated Schlenk.

Among his accomplishments this year comes a fourth DIRTcar Summer Nationals title, where he won a personal record 13 Features aboard the 29-race slate, defeating Hell Tour rookie Ashton Winger by 178 points en route to the $29,000 grand prize.

Several highlights included a $20,000 payday in his first career victory with the World of Outlaws Late Model Series in Farmer City Raceway’s Illini 100, another $30,000 marquee event win against the Outlaws at Boone Speedway in Iowa, and three Summer Nationals victories in-a-row at Beaver Dam, Davenport and Route 66.

“I’ve just gotta give a huge thanks to my dad, mostly,” Pierce said, reflecting on his accomplishments in a September release. “Starting me off pretty young, going to all these racetracks right in the beginning of my racing career. He pushed me to be the best that I could be, and it goes a long way.

UMP Modified – Nick Hoffman (Mooresville, NC)
Since 2019, the UMP Modified world has been ruled by a man who continued his domination tour throughout the country in 2021. With 26 Feature wins in 49 starts, Nick Hoffman is now a three-time DIRTcar UMP Modified national champion. 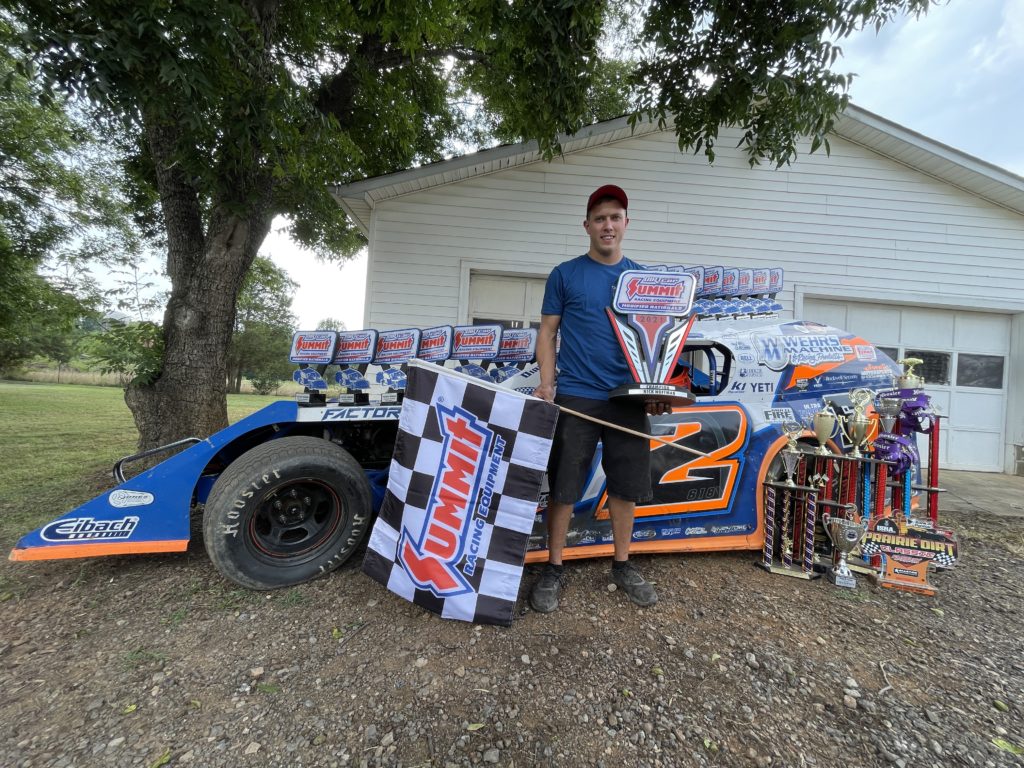 Just when the dirt track world thought things couldn’t get better for Blue Deuce & Co. after their dominant 2020 season, Nick, father Darrell, road crew member Shawn O’Neill and all of Elite Chassis put together a car and campaign that won a fourth DIRTcar Summit Racing Equipment Modified Nationals title, 19 of their 20 Summit Modified starts, and several marquee races along the way.

The accomplishments list doesn’t stop with those he earned in the Modified – Hoffman also made four consecutive Feature starts in June at Eldora Speedway’s Dirt Late Model Dreams, where he bagged two top-10s against the best drivers in the country. Then came his big break with Scott Bloomquist Racing at the end of July, where a phone call from team co-owner Cody Sommer put him in behind the wheel of the Hall-of-Famer’s Drydene #0 for several races to finish out the season.

Hoffman even expanded his reach further into the open-wheel world with success in the Dirt Midget ranks – a place DIRTcar fans could potentially see him more often in 2022 with the formation of the Xtreme Outlaw Midget Series, coming to Federated Auto Parts Raceway at I-55 next summer.

Hoffman is now tied with Devin Gilpin for third-most national UMP Modified championships in DIRTcar history behind only Jimmy Owens (4) and Mike Harrison (7).

“It’s kinda weird looking back at it, as it was going on,” Hoffman said in an August release. “We didn’t really realize what we were doing. You just kinda look past it and are always racing for the next day.

“Now that we’ve had a couple weeks here, it’s just pretty wild to look back at it. I guess we took it for granted at the time. It’s going to be something that people talk about for years, I think.”

Parga first won the division’s national championship in 2015 by a slim margin of 18 points over Nick Bauman. This year, he flat-out dominated, winning seven of nine Feature starts at Lincoln Speedway to clinch the track championship, and the national title by 86 points over Billy Knippenberg.

Other highlights included seven wins in eight Feature starts at Farmer City Raceway and eight wins in 10 Feature starts at Macon Speedway. In total, Parga scored 20 Feature victories in 38 starts for a win percentage of just under 53 – no other driver had more than 10 wins in the division this year.

Pro Modified – Owen Steinkoenig (Highland, IL)
The first of four first-time DIRTcar national champions made a mark on his home track this year, winning 10 of the 13 Features he started at Highland Speedway to clinch his first track championship.

“I won one at [Belle-Clair Speedway] in 2019 – the last year they raced – and that was cool, but it wasn’t as cool as winning at Highland with everybody that we know and grew-up with being there every weekend,” Steinkoenig said.

Other Feature wins for the 19-year-old came at I-55, Lincoln, Farmer City and Charleston for a total of 15 in 28 DIRTcar Feature starts – a win percentage of just over 53.

With visions of becoming a UMP Modified national champion in his future, Steinkoenig said his new journey toward that goal begins in 2022, driving a new car he and his father put together this year.

“I’m looking forward to next year with what we’ll be doing,” Steinkoenig said. “Full-time UMP Modified, traveling and running some of the Summit Modified stuff.”

Steinkoenig thanks each of his sponsors and crew members Adam, Lance, Jimmy and Jacob for their continued support through the 2021 season.

UMP Sportsman – Wes McClara (Blanford, IN)
After finishing top-five in the national standings three out of the past four years, Wes McClara has finally sealed the deal on his first-ever DIRTcar UMP Sportsman national championship.

McClara becomes the fifth different national champion of the division in the last five years.

“I never dreamed I’d be a national champion, to be honest,” he said. “A couple months in, I had led most of it, and then I thought, ‘man, I can do this if I just keep going.’ I just kept at it, and it feels pretty awesome to finally pull it off.”

In one of the closest points races of the season, Macklin bested rivals Terry Reed Jr. and Megan Erwin by under 60 points, winning 11 of his 36 recorded Features for a win percentage of just over 30. Both Reed and Erwin had 12 more recorded races, but Macklin’s diverse track list (Farmer City, Macon, Lincoln, Jacksonville) enabled him to collect wins against different local fields throughout the season.

“Somebody actually told us we were in third in points, and we didn’t even have our 20 nights in yet,” Macklin said. “That’s when I started paying attention to it, and then we started racing as much as we possibly could.

“We weren’t expecting it, but it actually ended in a lot of fun at the end of the year.”

Macklin becomes the eighth different driver to win the national Stock Car title in the past eight years.

Last year, Isaak and the #9x crew went on a tour of domination across the Midwest, winning 14 races and capturing their second national championship by 98 points. This time around, it nearly came right down to the wire, beating Sheldon Oberle by a narrow 11 points for the title. The two drivers matched in total wins with 13 apiece.

Nine of those 13 victories this year came at Highland, where he captured the track championship for the second-straight year. Now armed with his third Factory Stock national title, Isaak stands in a class of his own as the only three-time champion of the division.

“It’s been phenomenal, everything just kinda worked out,” Isaak said. “We only had one or two DNFs from parts and pieces breaking that just kinda happened. But overall, the consistency was there all season.”

Hawkins won 11 of the 15 Features he started at the Missouri oval this year, which propelled him to the win by 10 points over Dave Lauritson, who has now finished runner-up in each of the last four seasons.

Most remarkable may be Hawkins’ efficiency, winning 18 times in 23 races for a win percentage of just over 78. Every other driver inside the top-10 in national standings had more recorded races than he, yet none were able to match his win total. Additional victories at Tri-City, Highland and Spoon River completed his dominant year.

With only four cylinders under the hood, Hawkins said the key to racing up front as often as he does is proper maintenance.

“This Sport Compact class is so [dependent] on consistency and making sure you don’t have parts failures night-in and night-out,” Hawkins said. “That’s one thing I try and value my whole racing program on, making sure I go through the car every night and making sure I stay consistent to where I can run up front, and it proved itself this year.”

Tickets for award winners and drivers receiving points fund checks are available for purchase at the link below. Order form is due by Jan. 3.

WHAT TO WATCH FOR: UMP Modifieds Set for Six-Straight Nights at Volusia’s DIRTcar Nationals