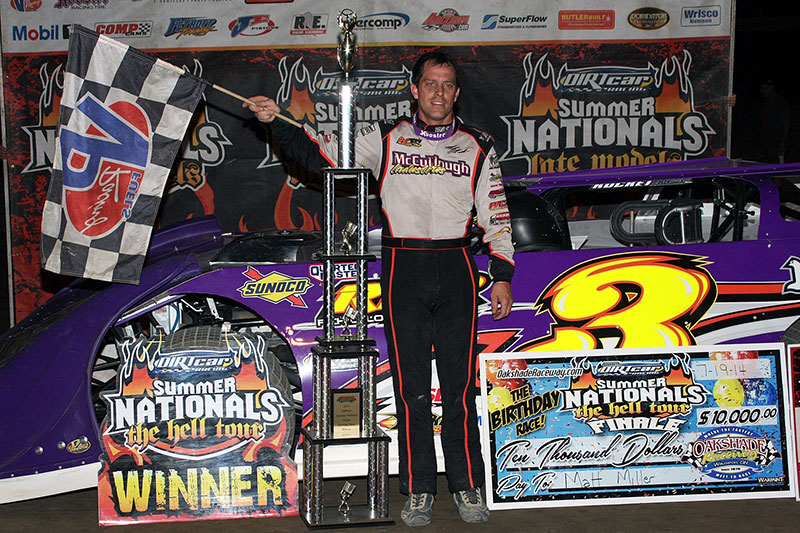 WAUSEON, Ohio.  July 19, 2014  On the night of champions, local star Matt Miller charged his way from the third position to capture the lead on lap 17 en route to claiming the $10,000 checkered flag at his hometown track of Oakshade Raceway for the second year in-a-row, and third time in his career.

Shannon Babb, who only needed a 19th place finish to secure his fourth DIRTcar Summer Nationals title, finished in the third position and easily scored the $25,000 series title for the first time since 2011.

Miller, of Whitehouse, Ohio, started the 40-lap feature from the third position as Mason Zeigler and Jeep Van Wormer started on the front row. Zeigler, after winning Thursday and Friday nights, looked as if he would accomplish the three-night sweep after jumping out to an early lead.

Saturday night had the look of the previous two nights as Zeigler managed to dominate the opening 16-laps of the feature. Unlike his previous two victories, the leader was reeled in by Miller who passed Van Wormer for second on lap five, and tracked down the leader by lap 16.

Miller, the 1991 Oakshade Raceway track champion, powered around Zeiglers outside on lap 17, completing the pass and securing the lead. Miller stretched his lead by the halfway point as Zeigler came under fire from championship hopeful Ryan Unzicker for second.

Unzicker, who started the night 45-markers behind Shannon Babb for the title, worked his way around Zeigler for second just before Zeigler lost control of his car, causing the races only caution on lap 38. Unzicker pressured Miller for the top spot but fell short of claiming the victory yet again as he finished second for the seventh time of the 2014 season.

Miller led 24 laps and defeated Unzicker by .759 of a second en route to claiming the checkered flag for the second year in-a-row at his hometown track of Oakshade Raceway.

This one is fun, Miller said in victory lane. Theres always going to be a race in September (the World 100 at nearby Eldora Speedway) thats at the top of my list, but this is definitely a good one. Were close to home and weve got tons of fans and people I know up there in the stands, so theres no doubt I get pumped up for this race.

Shannon Babb, of Moweaqua, Ill., started the feature in the seventh position, just behind championship rivals Ryan Unzicker and Brian Shirley. Babb chased Unzicker through the field, eventually finding their way to the front, as Shirley was a non-factor and finished in the sixth position.

Babb did what he needed to do in order to recapture the championship trophy. Babb glued himself to Unzickers back-bumper, and even challenged him for the second position in the final stages of the race.

Babb settled for a third place finish – which was his series leading 17th top-five finish to go with four victories  as he captured his fourth career DIRTcar Summer Nationals title by 38-points over Ryan Unzicker.

Its really hard to get these, said Babb, who admitted to getting nervous before the race started. Thirty nights of racing is a lot. You have a lot of ups and downs, but we got it done.