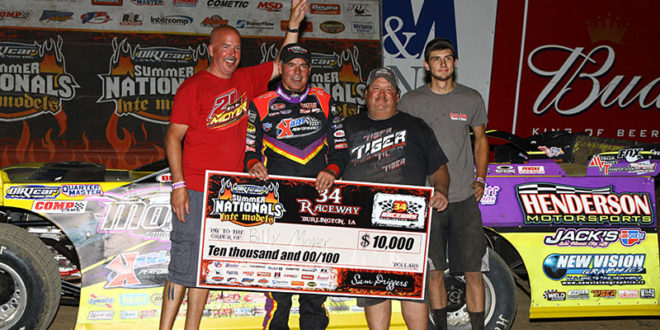 Moyer captured the pole-position for the 40-lap feature event over local driver Chris Simpson, of Oxford, Iowa. On the races opening lap, Simpson shot around Moyer who struggled to get going, as he fell back to fifth. Simpson controlled the top spot for the races first 26 laps, building a comfortable lead over third-place starter Brian Shirley.

Moyer charged his way back through to the field, and was in the right place at the right time when the leader jumped the cushion in the third-turn on lap 27. Simpson finally regained control of his car but had fallen to third, handing the lead over to Moyer.

Moyer held the top-spot for the final 14 laps, turning back seventh-place starter Brian Birkhofer, en route to claiming the $10,000 checkered flag at 34 Raceway  his second in as many nights after winning Friday night at Farmer City Raceway.

“We just worked our butts off here in the pits trying to stay on top of the car, and not knowing much about this place, everything was pretty much a guess,” said Moyer, whose victory celebrations were cut short after a rain shower moved into the area. “I dont know if we had the best car or not. I had to work my butt off, I know that.

Shannon Babb had a 28-point lead over Ryan Unzicker heading into Saturday nights action, but due to engine problems had to exit the feature event on lap 12. Babb now clings to a 14-point advantage with just five races remaining in the six-week long tour.