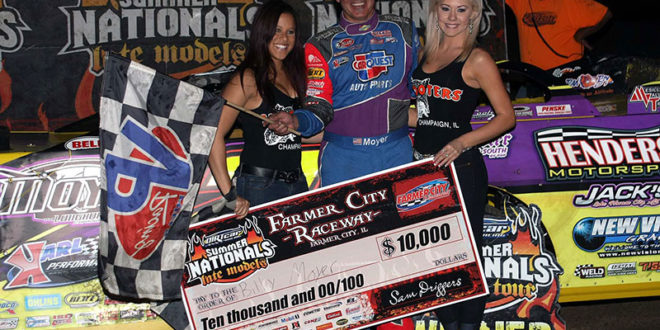 Brian Shirley started the 40-lap feature event from the pole-position with Mike Spatola starting to his outside. Neither driver managed to lead a lap as third-place starter Billy Moyer rocketed around both front-row starters and claimed the top spot on the first lap.

The six-time champion Moyer had the car to beat all night as he jumped out to a commanding lead early and never looked back. The only thing that dampened Moyers night was when a rain shower temporarily halted the race on lap 27.

Before the caution flew for rain, two race contenders were plagued by flat tires. Shirley, who started from the pole, rode around on a flat right-rear, gambling that the ensuing rain shower would end the race, but his bet didnt pay off as he was caught in the pits when the caution did finally fly. Seventh-place starter Brandon Sheppard was cutting into Moyers large lead when he too suffered a flat tire on lap 27 just before the caution came out.

When the racing resumed, Moyer again proved to be too strong, as he easily dominated the remaining 13 laps, defeating fifth-place starting Bobby Pierce by over two seconds, en route to claiming the $10,000 checkered flag, his fifth win of the season and 87th career DIRTcar Summer Nationals victory,

You just gotta have patience,” said Moyer of the rain-delayed feature event. “Im usually pretty good at that, just trying to hold yourself back and not make any stupid moves. Really, I couldnt see. It was kinda, I guess, raining the whole time, spitting, I think, you know, because the vision wasnt good the whole race really.

The DIRTcar Summer Nationals continues on Saturday night at 34 Raceway in Burlington, Iowa.