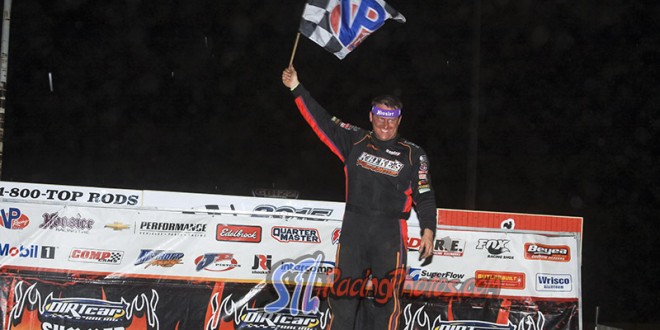 FAIRBURY, Ill. – June 20, 2015 – New father Shannon Babb moved to the lead in traffic on Saturday night at Fairbury American Legion Speedway on lap 28, then held off Ryan Unzicker to the checkered flag for his first victory of the 2015 DIRTcar Summer Nationals tour.

NOTE: Sunday’s event at Quincy Raceways has been moved to Monday night because of rain. Hot laps are scheduled to begin at 6:15 p.m.

Babb, whose wife Emalie delivered the couple’s daughter, Finlee Jo Babb, on Friday, started 12th in the main event and was the last of four different leaders, pocketing $10,000 for his effort. Billy Moyer Jr. got the jump and led the first 13 laps before his father Billy Moyer led until lap 22. Scott Schmitt moved in front until lap 27, when Babb worked to the lead and was able to stay up front to the checkered flag in the 50-lapper run in front of a huge crowd.

“It’s been the busiest couple of days of my entire life,” said Babb, a four-time DIRTcar Summer Nationals champion. “I got the best wife that anybody could have.

“I needed those guys to zig-zag at the right time. There was a lot of strong cars. Schmitt was really good, and Unzicker was really good. You never can tell. Fairbury always produces a heckuva a race, and there’s another one.”