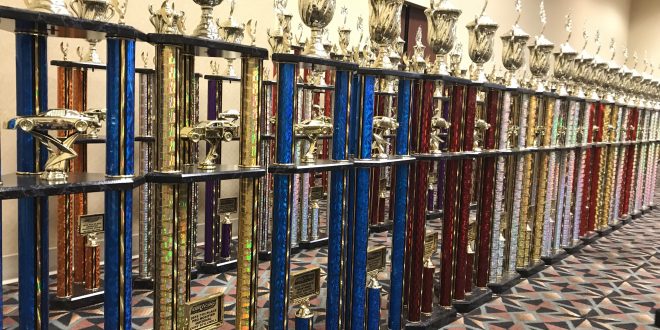 The 2018 DIRTcar Racing banquet from the Crowne Plaza in Springfield, IL was yet another successful night of celebration and reflection from all of the champions in each of the 11 series. Lots of hardware was given out, good friends were seen and great speeches were made before what promises to be yet another exciting year of DIRTcar Racing in 2019.

The evening began with the honoring of the Kids Mods class, and the champion Dominic Mertzke. After dinner was served, World of Outlaws Morton Buildings Late Model Series announcer Rick Eshelman kicked things off with the introduction of drivers in each participating division, up to second place in final points.

DIRTcar Pro Sprint Car National Champion Eric Saunders was the first of many champions to be honored on stage. Other champions were honored as follows:

The final three champions were then called to the stage to make their speeches and collect their checks and trophies. The first of which was 2018 Summer Nationals Late Model Champion Brian Shirley. Shirley collected a total of 16 wins over this past season and will be looking to repeat in 2019 against the summer’s heaviest competition, including the likes of Shannon Babb, Frank Heckenast Jr. and Bobby Pierce.

“We’ve been working hard. We rebuilt the car we’ve got, and we’ve got a couple new cars,” Shirley said. “We’ve been working in the offseason, trying to just pick up all the small pieces that we might have overlooked last year. Just nitpicking little things to hopefully find a tenth or two here and there to make us better.”

The next driver to take the stage was the now-7-time DIRTcar UMP Modified National Champion, Mike Harrison. The “Highland Hornet” racked up a whopping 31 victories over 2018, also scoring the 2018 Summit Modified Nationals title after a fierce, down-to-the-wire battle with runner-up Mike McKinney at Fairbury in July.

One thing Harrison wanted to make clear in his acceptance speech – he’s not going anywhere anytime soon; neither him, nor his crew that he also took the time to recognize on stage.

“I’m the one that gets all the glory, but it’s really all about the team and all of our sponsors that back us,” Harrison said. “If it wasn’t for all of them, we wouldn’t be able to do it. The older I get, the more I appreciate the whole team taking over and helping as much as they do.”

Last to take the stage for his Late Model championship celebration was 2018 National Champion Rusty Schlenk. Picking up 18 total victories in DIRTcar competition last season, Schlenk also placed fourth in Summer Nationals action. Overall, Schlenk agreed that 2018 was definitely a season to remember. But he’s not satisfied, beating his personal-best season wins record by just one. He’s hungry for more.

“It was huge. That’s kind of the goal in this sport, just outdo yourself year-after-year and keep going,” Schlenk said. “Just push yourself to do better and better; I’ve got my work cut out for me next year, now.”

Schlenk originally started out the 2018 season aboard the World of Outlaws circuit, but eventually dropped off and returned to regional competition. He says one day, maybe not tomorrow, he will return to run a national tour once again.

“We’re pretty comfortable to do what we’ve been doing – running around regional and picking and choosing some big races here and there,” Schlenk said. “We might do the Summer Nationals again, run some of the bigger races in our area, probably go for this [DIRTcar] deal for a fourth time and maybe run some American Late Model Series and American Ethanol Series stuff.”