“Get ready to rumble” Paducah International Raceway’s 2010 season officially hits the track on Friday, March 26th and Saturday, March 27th with the first annual Rumble By the River Double Header. NASCAR Nationwide Series driver Kenny Wallace will be mixing it up with local superstars when he races his Federated Auto Parts Modified.

Both events will feature the Modifieds, Pro Late Models, Streets, and the 4-Cylinder Warriors. Watch last year’s champions Todd Miller, Tait Davenport, JR Mason, and Jake Mayo defend their titles in their respective divisions. The race on March 26th will also feature the UMP Super Late Models with Kevin Cole as the series defending champion. Pits open at 4:00 and the Grandstands open at 5:00. Hot Laps will begin at 6:30 and the racing extravaganza takes the green flag at 7:00 each evening.

In addition to the Rumble By the River the Bluegrass Bash will be Sunday March 28th at Windy Hollow Speedway in Owensboro, KY making it possible for a UMP Modified driver to pick up over $6000 in three days. A bonus of $500 has been put up by the tracks for any Modified driver than can win all three events. 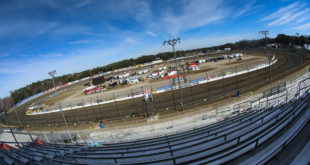 Thursday’s Portion of Sunshine Nationals at Volusia Postponed to Friday