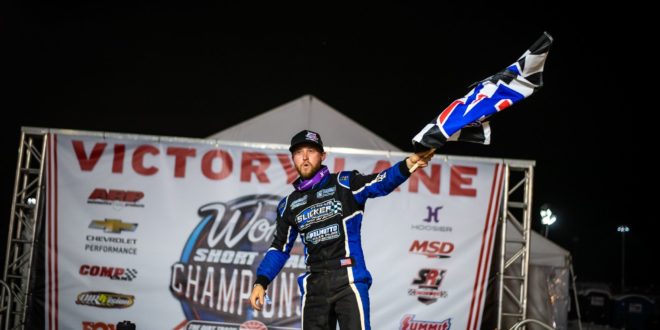 Trent Ivey made a choice that paid off Saturday night at The Dirt Track at Charlotte.

Dillon Brown grabbed the lead in Turn 1 of the 30-lap Feature, driving away from Ricky Greene and holding on for the first 18 laps.

Behind them, Ivey moved up from his eighth starting spot, working his way into a battle with Jamison McBride for third in the first five laps.

Once he cleared McBride on Lap 8, Ivey needed a Lap 12 restart to get by Greene.

From there, it only took a few more laps for him to power underneath defending race winner Brown, thundering by him on Lap 19 to take the lead.

The Palmetto State driver said he was trying to save his tire, hoping it would pay off when the race was over.

“I was caught between trying to save my soft right rear, which was a little different than anybody else,” Ivey said. “I was trying to blast to the front and hope everyone else went soft.

“The car was amazing, man, and it’s the first time I’ve ever driven this thing. I’m no stranger to Charlotte, but it’s been a while since I’ve won here.

From Gaffney, SC, Brown settled for second, falling short of his second straight win in the event. He said he made the wrong tire choice, which cost him a trip to Victory Lane.

“I reeled him back down there at the end, but he had a soft tire on, and we were hard,” Brown said. “It’s won me a lot of money the last two years. It lost me this one tonight. Ahhh, man. You just have to take it and go on.”

Ricky Greene rounded out the podium. The Newton, NC driver also said he felt he chose the wrong tire.

“We had a pretty good piece the first time in it,” Greene said. “I had high expectations, and it’s a pretty good car. I don’t know if we missed on the tire call a little bit. But the track blew off kind of quick on us.”