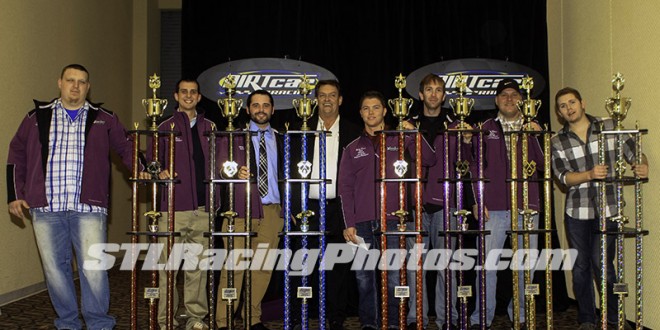 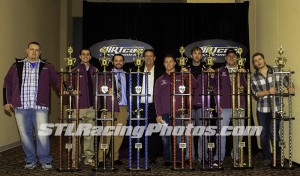 More than 700 attendees watched as DIRTcar Racing officials presented both Pierce and Gilpin with championship trophies and $20,000 points-fund checks. Shannon Babb of Moweaqua, Ill., left the banquet with the largest single check. The 41-year-old racer was crowned for the third time in his career as champion of the DIRTcar Summer Nationals ‘Hell Tour’ and earned a $25,000 points-fund payday.

In all, more than $350,000 was awarded to the champions and top performers who raced under the DIRTcar UMP banner in 2014.

Pierce’s recognition as the season’s top UMP Late Model driver was the crowning moment of the second-generation driver’s quick ascension to the top of UMP competition.

Born and raised in the heart of DIRTcar UMP country in central Illinois, Pierce grew up dreaming of one day matching his Hall of Fame father Bob Pierce in claiming a national championship before establishing himself as one of the division’s top up-and-coming drivers in piloting his father’s Bob Pierce Race Cars house car to impressive results over his first four seasons of Late Model competition.

After a runner-up finish in the 2013 UMP Late Model points, Pierce took command of this year’s national title chase with nine wins before Memorial Day. By the end of the season, Pierce had racked up a total of 14 UMP victories highlighted by a pair of victories in Eldora Speedway’s Spring Nationals and the season-ending Fall Nationals, a $10,555 payday in 34 Raceway’s Slocum 50 and a Summer Nationals victory at Belle-Clair Speedway.

For all his success in 2014, it was how Pierce overcame the low points of his season that made it special. Picked as a favorite to claim the Summer Nationals title based on his early season success, Pierce was quickly disappointed on the grueling six-week tour by early struggles and setbacks. He hit a low point midway through the tour when after crashing both of his team’s race cars, he was ready to pull off the series all together. But the support of his family and crew kept him going.

A rebound during the second half of the series wasn’t enough to put Pierce back in title contention – he finished fifth in the final Summer Nationals points standings – but it did provide momentum that propelled him to a string of victories and solid performances during the homestretch of the national points chase.

“I really have to thank my parents for getting me started in racing and supporting me and my crew,” said Pierce, whose crew chief Jason Palubicki was recognized as the UMP Late Model Crew Chief of the Year. “The greatest gift my parents ever gave me wasn’t the race car or the hauler, it was the gift of belief. When I was younger I wanted to play football, but I was way too small. I decided to drive race cars instead and I’m glad I made that choice.”

Pierce drove his Champion Spark Plugs-sponsored Bob Pierce Race Car to DIRTcar victories at nine different tracks in tying Randy Korte of Highland, Ill., for the most DIRTcar Late Model victories on the season. He ended the season with 2,561 points to beat out Ryan Unzicker (2,423 points) of El Paso, Ill., in the UMP Late Model national points chase.

Gilpin found himself in a familiar place while accepting accolades for his third consecutive UMP Modified national championship. The third-generation racer was once again stellar all season, driving his Vallery Chevrolet-sponsored Impressive Race Car to a whopping 33 victories. That mark bettered his total of 31 victories last season but fell shy of his 36-win season in 2012.

Gilpin topped a fierce points battle in edging former champion Mike Harrison of Highland, Ill., by 11 points in the final rundown. He earned an extra $2,000 for claiming the Indiana South Region championship.

“It’s a pretty humbling experience,” said Gilpin, who began his Modified career in 2005 and has leaned on the support and help of his grandfather and crew chief, retired racer Don Fleetwood. “It was a great thrill for me to be a 24-year-old guy racing and running up and down the road with my grandfather as crew chief.”

Gilpin’s third championship puts him in an elite category among current and former Modified competitors as he joins Harrison and Jimmy Owens as the division’s only three-time national champions and matches Owens, who has moved on from the Modified division to become one of the nation’s top dirt Late Model drivers, as the only drivers to win three consecutive titles.

“I’m proud to be one of only two drivers to three-peat a national championship,” said Gilpin, who plans to follow in the footsteps of Owens in making limited Late Model starts for Jim Beeman Motorsports in 2015. “To be at the same level as Jimmy Owens, that’s an accomplishment I’m extremely proud of.”

Babb celebrated his fourth Summer Nationals ‘Hell Tour’ championship with another $25,000 points-fund check. The veteran racer was solid and steady on the 29-race tour that ran from June 12 to July 25. He collected five victories on his way to topping Unzicker and former Summer Nationals champion Brian Shirley of Chatham, Ill., for the title.

Babb, who has finished among the top three of the final Hell Tour standings every year since 2009, said he will most likely chase a fifth tour title in 2015. Although he and his wife Emalie are expecting their first child in late June, Babb said his wife has already began encouraging him to run the series.

While Harrison fell short of claiming his fourth Modified national championship, he had a nice consolation in the form of two $5,000 points-fund checks, one for his runner-up finish in the national points and the other for his Summit Racing Equipment UMP Modified Summer Nationals championship.

Tyler Cain of Seymour, Ind., was honored for winning the DIRTcar UMP Sportsman national championship. He received a total payout of $3,200, including $200 for capturing the East region points title.

Josh Frye of Coopersville, Mich., earned a $3,200 check for his Stock Car national crown and East region title. Frye was a 22-time feature winner in 2014.

Tony Walker of Alton, Ill., (Factory Stocks) and Jeremy Reed of Decatur, Ill., (Sport Compacts) were honored as the national champions of DIRTcar UMP’s entry-level classes. Walker captured 16victories while Reed picked up 20 wins on the season. Both drivers earned $1,000 for their national titles.

Greg Kimmons of Pleasant Plains, Ill., received a $1,000 check for winning the 2012 DIRTcar UMP Late Model Rookie of the Year award. He captured one A-Main win and finished 34th in the national standings.

Oakshade Raceway promoters Pam and Terry Hendricks were honored with the 10th annual Bob Memmer Achievement Award, which honors the memory of the circuit’s late founder.

For more information on DIRTcar Racing and to see the complete final points standings for all DIRTcar-sanctioned divisions, visit www.DIRTcar.com.